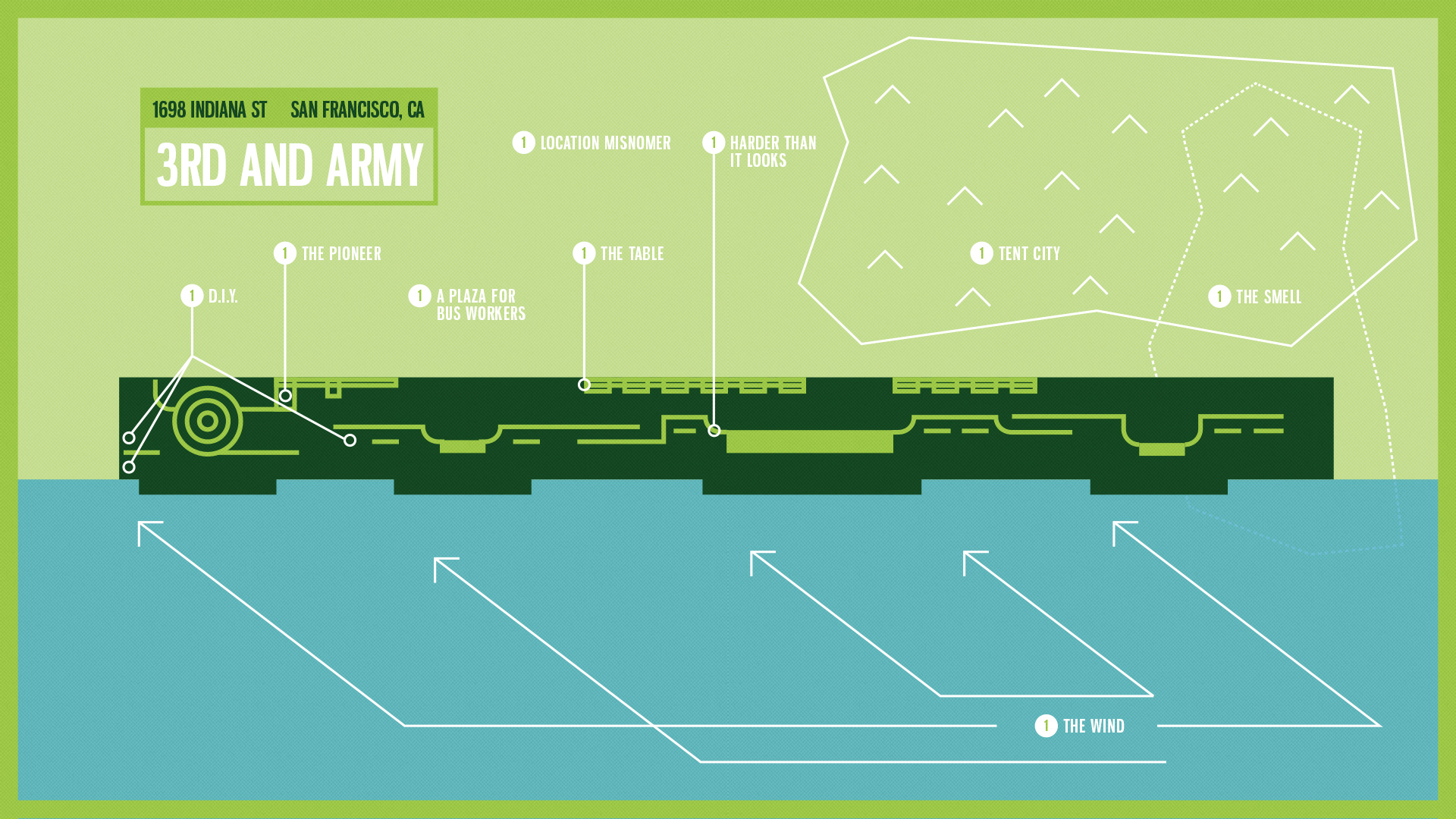 Handling marketing for San Francisco’s Deluxe Distribution, Damon Thorley knows the tricks from all over the city, and the stories behind them. Over the years he has seen the evolution of 3rd and Army as new generations bring their vision for what the spot could be.

3rd and Army is not located on 3rd or Army Street. It is located at the end of Indiana Street and two blocks off of Cesar Chavez, which was once known as Army Street.

A Plaza For Bus Workers

It was originally built as part an effort to give city bus drivers a nice place to have lunch or hang out while on break, but since its original construction, it is more commonly used by skateboarders.

The spot has gone through many eras and re-incarnations throughout the years. Among those are a number of DIY quarter-pipes, flatbars, and jersey barriers, that come and go. Some last several months, some a year, and some only a few days or weeks. It’s also a fairly common place for people to dump their unwanted furniture, which has resulted in some amazing tricks.

3rd and Army is notoriously windy and often results in pushing into the wind or going with it, depending on which direction you’re skating. The wind most commonly blows West to East and is worse in the afternoon hours, but has never stopped skaters from getting some of the best lines of all time.

As a result of the quickly changing economic climate in San Francisco, the homeless population has drastically increased in the past few years and parts of the 3rd and Army Plaza and surrounding areas are often home to several tent cities.

Harder Than It Looks

Although it is a truly amazing skate plaza, as with 98% of San Francisco skate spots, it is way harder to skate than you would think. After decades of skating, a few portions of the ledge are as round as a basketball and will give you a new respect for anything you’ve seen done on them in the videos.

The table at the end of the ledges has often been used to gap out to, but recently people have started skating it from flat. This table is waist high, and tricks like this simply do not make sense.

Rumor has it that Mike Carroll was the first to discover 3rd and Army by seeing it from the freeway overpass. He is also rumored to be the first person to kickflip the rock gap, resulting in an onslaught of tricks off the ledge and rocks in the years to come. It wasn’t until 2013 that Jake Donnelly took a trick over the gap from flat.

When Apple first released their Maps app for the iPhone, in 2012, if you zoomed in closely on 3rd and Army you could see Dennis Busenitz and Dave Chami shooting the BS Noseblunt slide around the corner. That was featured on the cover of the TWS May 2012 issue.