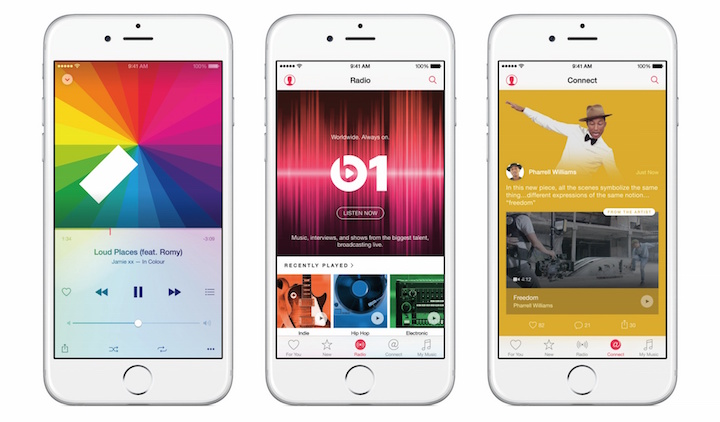 After Trying Apple Music, I Came to a Conclusion About the Best Music Streaming Service

Right before the orchestrated roll out of Apple music, I started to wonder if Apple had already reached its pinnacle of innovation.

The most culturally important tech company of the last decade, iTunes digitized our music libraries. But in the last few years, those libraries had begun collecting dust, as consumers rushed to streaming services, in particular Spotify, whose usability and popularity reminded me of iTunes in its heyday.

When Apple Music was announced, Justin Verson (“one of the baddest white boys on the planet,” according to Kanye) took to his Twitter account to taunt Apple and iTunes. Also, baddest chick in the game in terms of influence, Taylor Swift, wrote an open letter to Apple for not paying artists during its free three-month trial.

Admittedly, I was skeptical at first too. Especially after trying Tidal free for 30 days and not being convinced to make the switch (I still get I-miss-you-emails from them).

However, my interest was sparked by reading the big names that Apple acquired to host new radio programs for Beats 1 Radio (one of the many features on Apple Music). We’re talking Zane Lowe from BBC Radio, Ebro from Hot 97, Julie Adenuga from London’s Rinse FM… Credible folks who kept the radio stations they worked for hugely popular. Then some of the best artists making noise right now, like St. Vincent, Run the Jewels, Drake, and Pharrell are also included in the Beats 1 Radio package as hosts and planners of weekly radio shows. It was a more appealing way to bring in big names than Tidal, which ended up coming off like a bunch of rich folks arguing about money.

After my one week trial comparing Spotify to Tidal, I decided to put my skepticism aside and give Apple Music a shot. After all, a three month trial is pretty generous, and artists (or their labels) will still get paid. Here’s what I found.

Interface
Apple finally got the iTunes logo to pop again! The interface has many new tabs, such as Radio, Connect and For You that make the iTunes experience feel new all over again—and a lot more personalized. When you update iTunes and sign up for Apple Music, you’re asked what genres you’re into and to rate your love for certain artists, which Apple Music uses to tailor an experience specific to what your musical taste is. This works a lot better than you’d think. A playlist from a Nicolas Jaar song “Swim” introduced me to other IDM/Electronic acts that I haven’t heard of. It’s not unique, but I found many more new artists on a first listen with Apple Music than I have with any other music streaming service.

Curated Playlist
To get through the infinite amount of music out there, waiting to be heard, Apple doesn’t just have its own editors curating; you can look through and follow curators from music mega-sites like Complex, Pitchfork, NME, and Resident Advisor, to name a few, arranged like an RSS feed.

Transferring Over Spotify Playlist
This has yet to happen. Tidal, during its launch, had a third party site called Soundiiz easily transfer all of my Spotify playlists. Worked like a charm. Apple Music, for whatever reason, didn’t offer the same option at its launch. I can recreate the same playlist by adding every song manually, but it gets a bit murky when you have well over a thousand songs in a single playlist. I tried some sketchy, almost coding-like approach that I initially was optimistic about but to no avail. I also tried an app, StAMp (“Spotify to Apple Music playlist” which didn’t work). There are rumors that Apple’s going to release some sort of update/fix for this but so far, they’re just that: rumors.

Beats 1 Radio/Artist Hosts
Apple Music’s acquisition of the best in the radio biz has almost made me forget about my straggling Spotify playlist. Of those weeklies, one of my favorites thus far has been Annie Clark’s “St. Vincent’s Mixtape Delivery Service,” which promises a mixtape to “help you with life’s challenges.” Dr. Dre, Run the Jewels, Ezra Koenig, and Josh Homme are also amongst the initial hosts of Beats 1 Radio.

Conclusion
After a week with Apple Music, I’ve seen enough to jump ship from Spotify (whom I initially crowned as the music streaming service champ over Tidal). I’m hoping time will offer further refinement with things like transferring over playlist and playlist management.

Besides the first three months being free, having my own music library, streaming music, and an awesome radio station in Beats 1, all in one place, makes a lot more sense to me than constantly flipping between iTunes and Spotify.