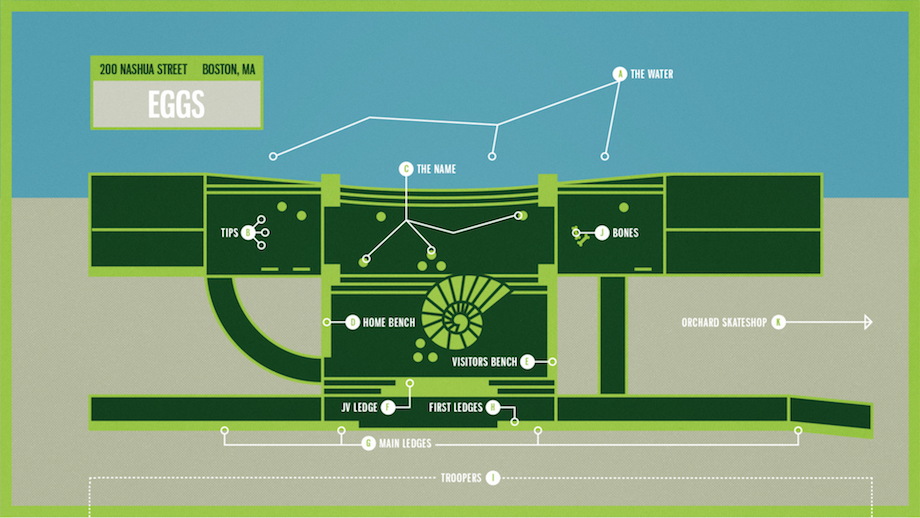 Armin Bachman is the man behind Boston’s best skateshop, Orchard. He is at Eggs a couple days a week, sitting on the Home Bench and sessioning the ledges with all the other locals.

Eggs is literally across the river from a brand new, multi-million-dollar, 40,000 square-foot park; you can see it from Eggs. “One random Sunday in December I counted about 50 heads there,” says Bachman, “then I went across the river and there were 33 dudes at this small plaza spot. Almost just as many people skating this little plaza spot as there are at the $4.5 million megapark.”

For the first year or so, people were chilling up top by the main ledges. Then dudes started getting more comfortable there or realizing the flow of the spot. Ninety-nine-percent of the time when you get kicked out it’s by State Troopers cruising through the top. People started moving away from the benches up there into the middle area. Most people gravitated toward this side because it has more sunshine during the day.

There’s a commuter rail stop right by the spot so people come in from out of town and go straight to the spot. People that were non-locals tended to gravitate toward the Visitor’s Bench.

John and Tommy Wisdom were definitely some of the first locals. Word is, in the first couple of sessions, John said “these things look like eggs” and it stuck. Even the architect firm that designed it has a note on their archive that acknowledges that skaters call it Eggs.

There are a bunch of people who will claim to have taken the knobs off or others will say that they did. Boston is a pretty small scene so word travels pretty quickly.

People lose their board in the water all the time. From skating flat, skating the Three Stair… Sometimes people are skating flat in front of the Home Bench, and a board will shoot out and go in. It’s not really too deep. There is a landing there. Depending on the tide you can get it. At high tide, dudes will use a camera tripod to try and retrieve their board. For the most part you can get your board. Strip down and you might have to go up to you waist to get it but you can get it.

One goes kinda downhill and there’s a longer flat one. There is a bike rack close to the other one that is down hill. And that blacktop has gotten kinda bad over the years.

There’s a dude, Bones. He’s not a skater, he’s probably in his mid fifties. He’s from The Bronx, but he’s lived in Boston for years. Somehow he’s just become the mascot. He’s loud and annoying but he has a huge heart. The regular crew there, it’s almost like a home for lost boys.

The paths were originally built for exercise. There was a rehab hospital close by but that closed down a few years ago. Since then, things have become a lot more lenient. Troopers will still come by but I haven’t heard of any major issues.

Pretty standard stuff. Say what’s up. Be a normal human being and people will be normal back to you. Observe the flow of how things go before diving right in. There is a natural ebb and flow.

Make sure you come to the shop. It is a five-minute push away.