Why Apple TV Will Be the Fourth Big Name in Gaming

Only three names matter in the gaming market: Microsoft, Nintendo, and Sony. But with the launch of the new Apple TV, the world’s biggest tech company is pushing to become the fourth.

Many have come and gone competing against gaming’s most elite brands, OUYA being the biggest loser. The Android-based console provided access to thousands of mobile games, but the massive stronghold of the PS4 and Xbox One (along with terrible marketing) destroyed its chances. Take into account the calamity that was Apple’s first-ever gaming system, the Pippin, back in the early ’90s, and history suggests that the tech giant is doomed to suffer the same fate.

Senior analyst at Wedbush Securities Michael Pachter believes “the current console makers don’t and shouldn’t fear Apple,” based on the Apple TV’s lack of hardware specs: “Console games are large files that require a disc or a lot of storage,” he says, “as well as a lot of processing power, and a high-resolution graphics card. Apple TV has none of those, and consoles have all of them.”

Sure, we already know the Apple TV isn’t anywhere near as powerful as any of the next-gen consoles. These machines utilize Blu-rays that store up to 128GB on a disc—that obliterates the standard 200MB reserved for iPhone games. Even Wii U game discs hold 5GB of memory. And let’s not talk graphics. So how can Apple’s compact black box overcome its high-powered competitors? Well, it’s all about selling the audience on the multimedia experience and dope accessories.

Instant access to the App Store’s endless library of games is a huge advantage that wasn’t afforded to other mobile console flops. More big-league franchises are hitting the mobile front such as Guitar Hero Live and the latest version of Disney Infinity, showing that the micro-console has the support of major game developers. Not to mention more IPs originally available on other platforms, like PS4 fan-fave Transitor, are being ported over. 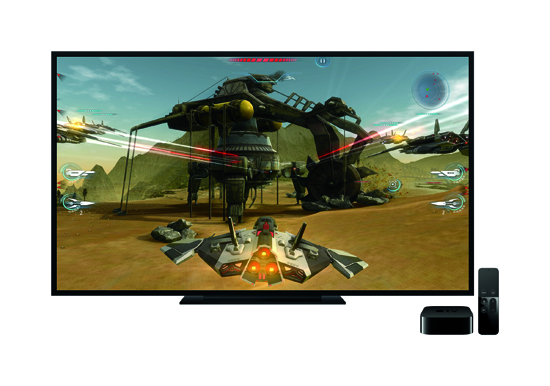 What exactly is drawing developers to Apple TV? Simple: The motion-sensitive Siri remote. This Wii-reminiscent remote features a touchpad and simpler control scheme designed to encourage novice gamers to be more active on the console. Doesn’t hurt that iPhones and iPads can serve as controllers, too.

The technology will open up limitless possibilities for gamemakers. Although, Apple’s third-party guerilla warfare tactics could be its Achilles heel; forcing all apps to support its motion controller is a bold demand for a company looking to make an instant impact straight out of the gate. And it could put Nintendo’s potential shift into mobile gaming in jeopardy.

At this point in time, Nintendo has no choice but to move into the mobile lane, which it’s progressively doing with the upcoming Pokémon Go, an augmented reality RPG that lets players battle and capture monsters on iOS devices via wearable device. How this accessory might play into Apple TV’s guidelines has yet to be discussed.

James McQuivey, Ph.D., vice president and principal analyst at Forrester Research, believes Apple TV is “too little, too late.” Wow, really? To consider any Apple product DOA is, in my mind, premature. Apple’s track record for creating revolutionary devices, let alone its footprint in mobile gaming, speaks for itself.

We know Apple TV won’t appeal to hardcore games, especially since it’s catered more towards mobile gaming, which is made up mostly of casual gamers. It just needs to keep us plugged in by offering a dynamic at-home gaming experience that we can continue on the go. And it’s already halfway there.