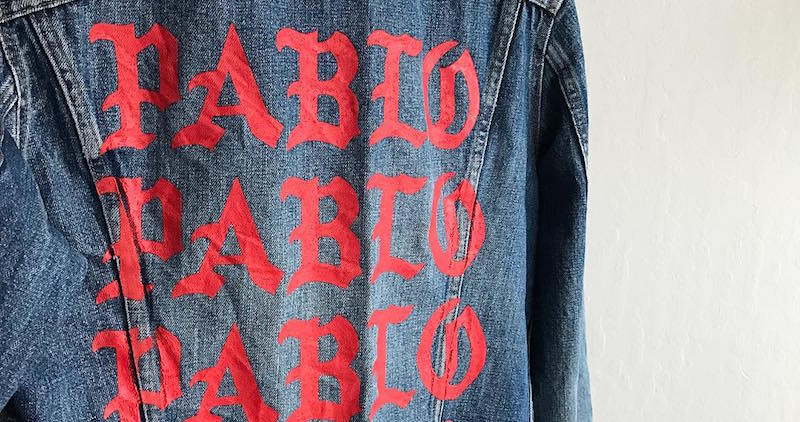 Here Are Our Picks For Best Concert Merch of 2016

In streetwear fashion, 2016 has definitely been the year of the rock tee, Thrasher gear, and concert merch. Thanks to this year’s monstrous round-up of epic concerts—including Kanye West’s Saint Pablo tour that spawned many Gildan bootlegs—the popularity of concert merch has skyrocketed. Not only do these pieces serve as great street-style options, they also encapsulate and immortalize memorable moments in time.

Aiding street fashion’s never-ending desire for exclusivity, part of concert merchandise’s appeal comes from the fact that you typically can only get it at the shows or via limited release (unless you like haggling resellers). And if you do order it online, chances are you won’t receive it any time soon. If you really want to be a part of the experience, you’ve just got to be there.

Artists have even stepped up their presentation game by crafting special pop-up shops at tour stops, furthering the artistic experience. It’s no longer just about the music; it’s about the lifestyle.

Looking at the year thus far, here’s the best concert merch of 2016, guaranteed to be on every back near you. 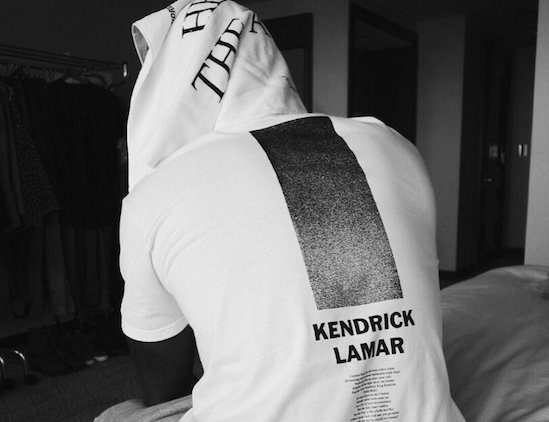 Initially only available at NYC’s Panorama festival, Lamar’s small collection of tees and towels incorporate motifs from Lamar’s Kunta’s Groove Sessions tour setup and lyrics from his untitled unmastered. album. While the goods encourage clean minimalism and small text mostly, the strongest piece is a black t-shirt that features Lamar’s now-famous, expressive neon sign from his tour. If you missed out, you’re in luck—the merch is now available on TDE’s site. Move quickly. 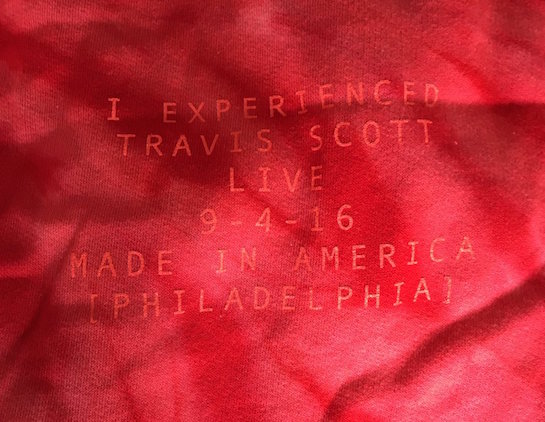 Though all of Travis Scott’s merch tends to do numbers outside of show dates and tours (including a 60-piece collection that had the world on standby for a toothbrush), his standout pieces this year came from his concerts in Brooklyn and in Philly, for the Made In America festival. Taking a slight deviation from the normal tour tee, his Coney Island shirts featured a flaming cactus, a hot dog, and a massive eagle, while his iconic Made In America set begot a striking red tie-dye hoodie.

When It’s Dark Out World Tour 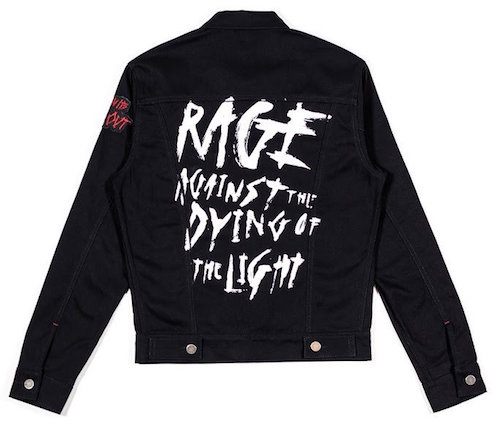 If When It’s Dark Out and his tour goods are any indication, Oakland rapper and producer G-Eazy must be a fan of poet Dylan Thomas’ “Do Not Go Gentle Into That Good Night.” Bringing the rage against darkness on the road, G-Eazy dropped accompanying emo-rock-feeling merch that blends well into streetwear’s current hardcore style. This isn’t your average collection of concert tees and hoodies, either—the line also notably features a badass denim jacket with “Rage Against the Dying Of the Light” on the back. 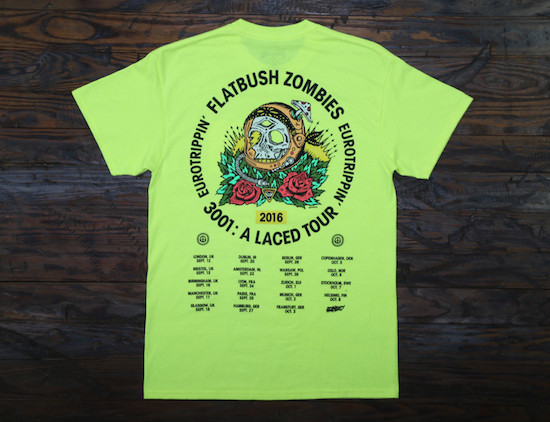 Underground kings Flatbush Zombies brought the trippy vibes to their tour merch, importing graphic motifs from their 3001: A Laced Odyssey album artwork. Including designs by Madbury Club mastermind Phillip T. Annand (who you can also find in The Green List: 100 Underground Brands in America), standout pieces include a psychedelic skeleton on a fluorescent-yellow tee and marble tie-dye greatness. 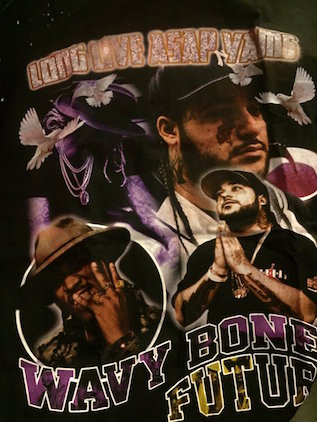 If you’re a Future Hendrix fan, copping his DBruze-designed Freebandz vintage tees (and RSVP Gallery collab shirt) was a must this year. The collection of ’80s- and ’90s-styled t-shirts, some inspired by Pen & Pixel designs, made appearances online and in pop-up shops across the country for Future’s Purple Reign tour. The line also included a gem—an A$AP Yams tribute shirt, requested by Future himself. 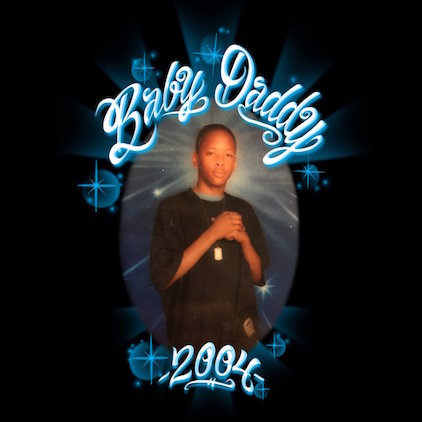 While on tour this year with RJ, Sad Boy, and breakout Bay-Area artist Kamaiyah, YG sponsored pop-up shops featuring his 4HUNNID Clothing, creative directed and designed by Gavin “Mizzle” McNeill. Particularly conscious of the details, YG’s pop-ups have been carefully curated to include LA themes and clever setups that bring the clothing to life. He didn’t forget the ladies, either, adding in a throwback, airbrushed “Baby Daddy” t-shirt that makes the classic concert feel complete. 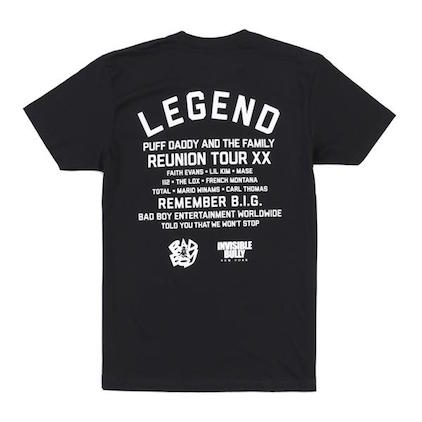 Puff Daddy and The Family have been bringing back the late ’90s to early aughts while reunited on tour this year, and thanks to their packed merch tables, you can join the family, too. Partnered with Invisible Bully, Bad Boy has classic-colored shirts and jackets (and a standout yellow Biggie Smalls jersey) at every stop. While the jersey is only available at the concerts, the majority of the apparel is available online on the Bad Boy website.

Hitting the road with Joey Bada$$ for his Blank Face world tour, ScHoolboy Q released merch exclusively at stops and on TDE’s website. Inspired by his album of the same name and Q’s groovy style, the collection features vibrant tees, hoodies, and dashikis that don Q’s likeness, signature, and “THat Part” lyrics. 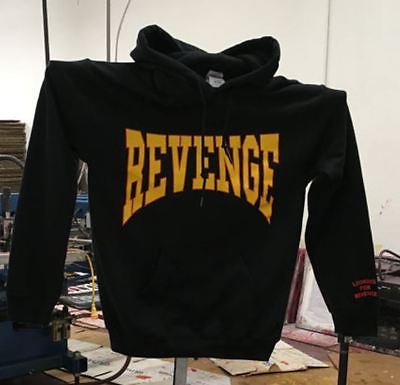 Although it features simple designs, the reach and appeal of the Summer Sixteen merch is undeniable, courtesy of the popular “Revenge” hoodie—a bold sentiment to which most can relate. Whereas other merch collections have ventured deeper into fashion and curation, the Summer Sixteen goods stand out by taking it back to concert merch’s traditional ways without all of the bells and whistles.

DBM for MCD, small collection. Available today at the stadium and also @FatTigerWorks if you can’t make it to the show. 😊™ pic.twitter.com/NvbtmcUa1h

Chance the Rapper has been having an amazing year—and that’s an understatement. To commemorate his much-publicized Magnificent Coloring Day festival at Chicago’s U.S. Cellular Field, Chance collaborated with Joe Fresh Goods’ DBM for a small collection. The limited selection of fun t-shirts and hoodies, featuring DBM’s branding, was available online, at the stadium, and at Fat Tiger Workshop while supplies lasted. 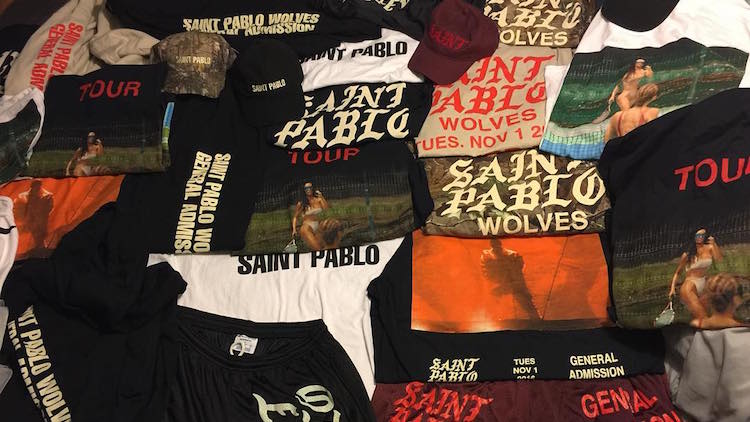 If you somehow haven’t been able to tell, the undisputed concert-merch king of 2016 is none other than Kanye West, courtesy of the Saint Pablo tour. Thanks to Kanye West’s status as a fashion icon (read: god), along with the universal appeal of the Blackletter font, the Saint Pablo apparel has probably become the most bootlegged, inspiring, and widespread merch of 2016 (or arguably ever). And the Yeezy machine isn’t slowing down, as Kanye continues to add in new variations and colorways throughout the tour, including date-specific, exclusive options. Gildan is definitely the unsung hero here. 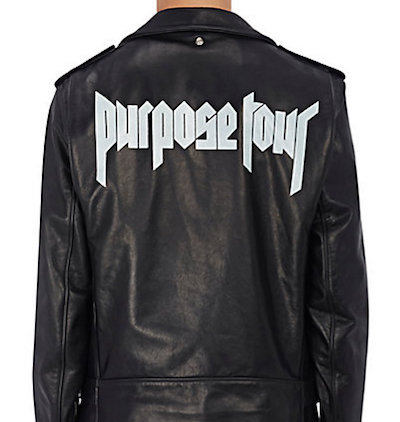 For his massive world tour, Justin Bieber brought out the major fashion artillery, teaming up with Fear of God’s Jerry Lorenzo. Featuring Biebs’ face and song titles with a rock-inspired font, the Purpose merch is ideal for the ultimate Belieber, and is available in retailers ranging from Forever 21 and Urban Outfitters to Barneys and VFILES—an impressive feat no matter your musical taste.