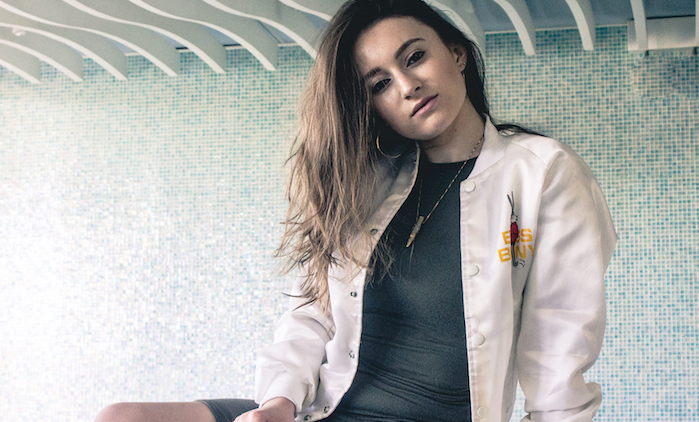 Growing up with Chance The Rapper, Vic Mensa and Nico Segal (a.k.a. Donnie Trumpet) as childhood pals would be any current artist’s dream.

For 23-year-old Chicago native Simone Bisous, it’s a reality — one that’s pushed her to pursue her own career in music, motivated by the strides her friends have made to advance the city. And though she and the guys now run in different circles, she’s ready to march ahead to the beat of her own drum, literally.

“Seeing us go from singing ‘The Lion Sleeps Tonight’ at my bat mitzvah— I was on vocals and drums, Vic was on saxophone, Nico was on trumpet, of course — just seeing them where they are now and them pursuing their dreams, it’s really hard to do that, but it just motivates me to keep on grinding,” Bisous says.

Growing up bouncing back and forth between Chicago and France with other states thrown in the mix, Bisous has been exposed to more culture and diversity than the average person. Not only is she musically gifted, but Bisous also dances and has a solid background in acting, having appeared in commercials and almost landing big leading roles (she’s also a part of women’s collective Cliché, who appeared at this year’s SXSW). Her music career, she says, happened a bit more unexpectedly.

After experiencing heartbreak in college, Bisous wrote two songs and posted them on SoundCloud, rapidly receiving a popular response. “It was so fulfilling,” she says. “Even when I wasn’t having plays, it was just nice to have made it.”

Now with the release of her debut album, BISOUS, kicked off with a party at her family’s local Chicago restaurant on Riverwalk, Cyrano’s Café, Bisous is determined to strengthen her city’s place in the spotlight. And with the Chi currently riding high partly thanks to her fellow natives, she’s right where she was always meant to be.

We found her in an alley, and we took her in. I always wanted her to kiss me and she would just always bite me — a couple times she would get very close to my face and it was very bloody. My mom tried giving her away like three times, [but] nobody wanted her because she would just keep biting. That just kind of ties into the whole concept of the album. No matter how much you want something or somebody to love you, or for you to fit in, if you don’t fit in it’s for a reason.

“Don’t let ‘fitting in’ change who you are.”

Lead never follow. It’s okay to be alone, and sometimes it’s hard to remind yourself that. When I sing, it also helps me remind myself that I’m not perfect, and I may not have fit in when I was younger, but it’s all for a reason. Bisous means kiss in French, almost like leaving a kiss on people although they may have given you hard times. Because of them, I am where I am now.

Kanye West was so big for me. [With] 808s & Heartbreak, everybody hated on it and I was just like, I know what you’re feeling; it’s okay to be different — like in terms of wearing the blue contacts at the Met Gala. I remember when Vic was starting to pop off and everybody was like, “Yo, he’s so wack for the grey hair, for the blonde hair, and I was like, let him do him. I’m an artist and I can’t stand when people hate on other people. You don’t know the person, and I hope that people think like that when they see me.

Her work is ethic is pretty serious; she’s already working on her next album.

It’s half planned already. Half the songs are in the works; the title’s already done. The title is Seasoning.