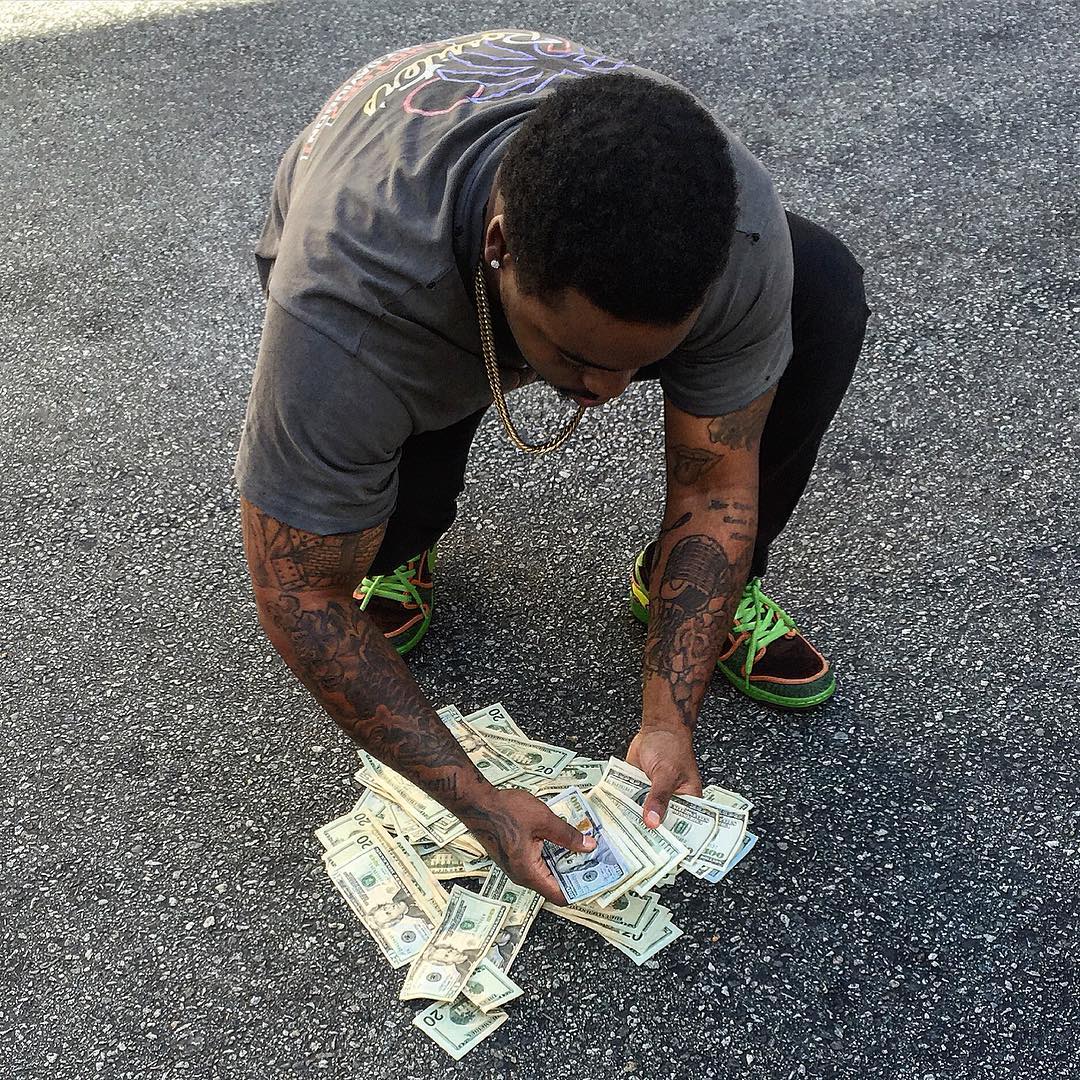 At a glance, Joey Fatts can’t be any taller than 5’6. He begs to differ.

“Y’all got me messed up. I’m like 5’10,” says the energetic Long Beach rapper, springing upright from his seat in front of me and lengthening his spine as far as his posture will allow. He takes a second to reconsider, as his Cutthroat Records cohorts break into wild laughter. “Well, actually, I’m 5’9 and a half,” he continues. “I went to the doctor. Do you see this hump right here?” He points to an imaginary spot on his head. “They put the measurement stick right here. And that’s flat-footed, no shoes, so you add two inches for the shoes’ platform, and I’m 6’0.”

Despite having a past checkered with homelessness, failed football dreams (he had about 15 college scholarship opportunities, but didn’t qualify with his SATs in time), and minor transgressions, Joey Fatts is cheery, with a fondness for pranks.

“When I was in school, I was the class clown,” Fatts says. “I’m naturally shy so I break the ice with joking. I never thought I looked good until I started rapping—short-man complex. Every girl from high school wants me now. Girl, it’s tenth grade all over again—remember you didn’t want me?”

Growing up, Fatts was infatuated with the West Coast player lifestyle that his family flaunted—Louis Vuitton phone cases, two-way pagers, and 100-spoke Dayton rims on Cutlasses that boasted dual-exhaust pipes and a 350 engine. Now, his only goal is to make enough money to bring his big family under one roof. He couldn’t care less about fancy artist riders for shows and flashy cars that depreciate in value—though he still will sport an occasional Rolex or designer sneaker in place of his Chucks.

“Everybody wants to be tough, and there’s a lot of people hiding behind computer screens now. I dress in tight clothes,” Fatts jokes. “I just like to have fun; I’m just in my own world. I’ll just be walking and doing my own thing, and everyone just comes to me. I’m just high off life—just freaking happy,” he says with a laugh. “We’re just happy to be able to do a show.”

With Fatts gearing up for his next release, 562, and continuing to push the Cutthroat Records movement forward, that big house looms closer in the distance. Yams would be proud.

Unbreakable Love You For Life Happy Birthday @Wavybone. Lord knows I’ll give it all to have you here.

You have to spend money to make money. Yams is the one that really put me on; he stuck his neck out for me. A lot of people cherish money, but if it ain’t life-changing money—enough to get everybody set—then you should be focused on spending that and looking the best way possible spending that money because that’s what’s going to get you the next check. You holding onto that money is going to burn a hole in your pocket, and by the time you figure out where those dollars went, you’re gonna be broke with Payless shoes. So you might as well get you some nice Margielas and look nice while you’re spending, and bring more money to your situation because at the end of the day, money infatuates people. You’re an entity. Just like you put new wheels on your car—you know how many people are looking at your car? Well, get you some new wheels on your feet. That’s what Yams taught me.

Rappers are just rappers. You’ll know who’s really real; the ones who really break it down to you and let you know about them. But the other ones who just introduce themselves as their stage name—yeah, music type number seven. You don’t mess with those. You mess with the ones that text you and make sure you’re straight every morning. Action Bronson is one of those people.

Be original and stick to your guns. Don’t worry about the times changing. As long as you’re real and you’ve got good music, people are going to rock with you always. Don’t worry about show counts because it’s all a building block. I’m used to seeing bigger crowds [with A$AP Mob], so going from those big crowds to small crowds is a little humbling and ego-swallowing, but it’s fun. I could be mad that I’m not having 1,000 people show up every night, or I could be happy with these 200, 300 people that are showing up and have a party. I know it’s only gonna get better.

Don’t look girls in the eye so they’ll want me. He’s got it down to a science—he knows to not look them in the eye because it’s a level of importance they get when you look at them and stare. They’ll be like, “Oh yeah, girl. He’s looking at me.” But when you’re not looking and you’re just in your own world, they’ll be like, “Girl, he’s not paying me no attention. What you doing, boy?” That’s why you see me in my own world with all those girls. I ain’t even light-skinned. Girls came from across the water to see your boy.

His family taught him too…

On the business side, my mom just tells me to be safe. My mom doesn’t care about the money or none of that stuff. She just says, “Make sure you take care of your sisters and brothers.” So that’s my job. She’s a philosopher; she’s crazy and from Compton, but she knows her stuff. My mom is the mom that keeps you giggling 24/7. But when she’s in a bad mood, everybody is getting out—the dog will even feel uncomfortable. The way I act is from her. My daddy is wicked, but he’s smart at the same time. My dad is a dad—the kind you can never be friends with, but he’s always going to put me up on some game and tell me what I’m doing wrong, what I’m doing right. He taught me a lot about business, even the mistakes he made. Everybody plays a position; that’s one thing he taught me.