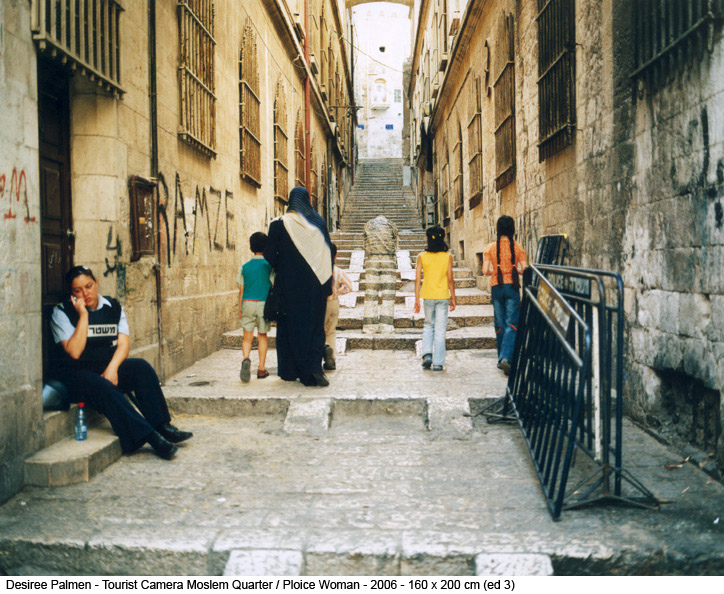 How Artist Desiree Palmen Camouflages Herself From Surveillance Cameras

Palmen started camouflaging herself in front of surveillance cameras because she didn’t like looking at herself on the security cameras screen while waiting in line at the post office in Maastricht, Netherlands. “This annoyed me,” Palmen says. Soon after, Palmen painted herself to blend in with the post office’s interior, and brought a friend along to film the stunt with a hidden camera.

That was 1999. In 2002, Palmen launched a project called STREETWISE, in Rotterdam. She would camouflage people to match a particular public scene that she had photographed, just as she had done at the post office in Maastricht a few years prior.

The camouflaged individual—sometimes herself, sometimes a model—would always be positioned in view of a surveillance camera. She would then stand atop a ladder, hold out a camera attached to a stick, and take photos and videos of the model and their surroundings. “I directly addressed to the personnel that watches the cameras by trying to match up the painted camouflage costumes with their perspective, given by the mechanic eye of the surveillance cameras,” Palmen says.

Since the painting took place at her studio, she often had to return to make color corrections or other tweaks if the costume didn’t perfectly match the background.

Palmen’s intention was, in her own words, to “quest[ion] the monitoring of people in public space.” She felt she was making a comment to anyone monitoring the security footage about humanity’s innate desire to not be watched; equally, for passerby, the presence of the obscured model was intended to have a similar effect: to make them think about why they were being monitored, and whether or not it was necessary.

Palmen’s interest in camouflaging models in urban environments also stemmed from a lifelong interest in science. “I always maintained a special interest in biology, in particular the strange forms and behavior traits exhibited by mimics within the animal and plant kingdom,” Palmen says. “I tried to apply these concepts in my artwork. An exploration of human mimicry in urban environments using garments painted to resemble their background.” Her work shows how humans, like chameleons, might be able to blend in to the environments we created for ourselves.

Palmen took a version of her STREETWISE project to Israel in 2006—this time, under the name OLD CITY SUIT—when she was invited by Palestine non-profit art organization the Al Ma’mal Foundation for Contemporary Art. By displaying the same type of work in public spaces of two very different countries, Palmen was able to demonstrate how camouflage can be used in various urban environments, and how the desire to blend in may be universal.

Palmen put up camouflaged figures in both the Christian quarters and the Muslim quarters of Jerusalem. In one of her works, a model was blended into the background of a steep set of stairs in a highly touristed area. Visitors got more than they expected when taking photographs that day, and Palmen got to expand her audience beyond security camera operators. “It was interesting because next to the cameras that monitor people in the street there were many tourists that took pictures standing on the stairs,” Palmen says. “My aim was to be in their pictures too, as a more or less invisible person.”

The interactions between the public and the models during the STREETWISE and OLD CITY SUIT projects were, for the most part, positive. Palmen intentionally chose to carry out both projects in “so-called dangerous city areas,” but she experienced few problems aside from people coming up and asking how long she was able to stand in that position without moving or getting water. Her biggest threat came after painting herself gray and white in order to mimic the striped lines of a cross walk. “One person on a bike tried to hit me as I was standing in the middle of the zebra crossing, and cars were, of course, honking,” Palmen says.

Even in heavily monitored areas of Jerusalem’s old city, law enforcement officials were appreciative of her work. “I think it was on the third day of the final photo shooting at the end of my stay that the police came to ask us what we were doing,” Palmen says. “They told us that it is forbidden to fix our camera on top of the surveillance camera. That was all. I guess they liked what we did because they already had a nickname for the camouflaged figures.”

Palmen hasn’t worked with camouflage since 2011, when she traveled to Istanbul and took photos of painted models in public. She has, however, run camouflage workshops for children in both Istanbul and Vancouver. As for her next project, she claims she has “a project planned for airport security called BAGAGE HUMAIN.”

But, Palmen wonders if her work has made people question the use of surveillance as much as she had intended: “I think most people seem to think that surveillance cameras increase our safety,” Palmen says.