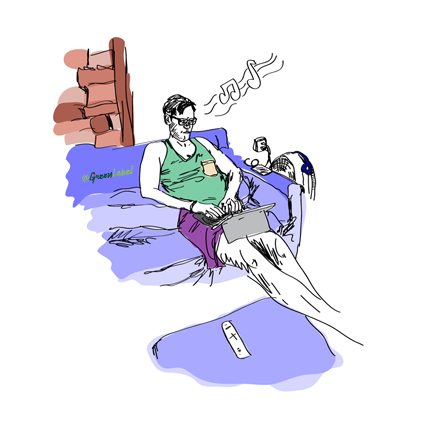 How To Form a Band Without Leaving Your Living Room

In 2001, an indie-rock ensemble called the Postal Service composed an album mostly via snail mail. They sent CD-ROMs between Seattle and Los Angeles, building the album little by little. Around the same time Dutch producer Nicolay connected with the rapper Phonte on a message board and they created their critically acclaimed 2004 album, Connected, without ever meeting.

The trend of bands who have never met has grown over the years along with the technology: you no longer have to put your lyrical genius in the hands of UPS to get your sound across the world. In fact, the times of meeting your bandmates in a dingy dive bar almost seem primitive post-internet.

Here are ten tips to forming a band without ever leaving your living room.

Defining itself as a “global artist community,” this site aims to bring together artists who are looking to collaborate from all over the globe. Kompoz is a social outlet as well as an online workspace for musicians. You can set up a profile with your recordings, favorite genres, and what you’re looking for in a musical connection. You can also search for fellow artists by instrument.

Similar to Kompoz, this site promotes the coming-together of talent across the globe. Musicians can play together in real time, as if there were mere feet between them instead of miles. It also connects musicians and their fans by streaming live performances.

If you aren’t the most instrumentally blessed person, and lyric writing is more your forte, Songwriterlink.com is your jam. You can upload your lyrics and search for composers, beat producers, and other songwriters. The site also offers critiques to prepare you for a dog-eat-dog entertainment industry. The site also allows others to search for you, in order to begin a musical journey right then and there.

Does your dream collaboration involve a musical legend or well-known newbie? Hookist.com is a social event in which regular Joes and die-hard fans can potentially partner with celebrity musicians to write original songs together. Talk about the ultimate in bragging rights! Lyrics are submitted and compared against other talents, testing your inner lyrical brainchild. Hookist also features a Hall of Fame, showcasing the most popular writers and what they’ve created. Even if you don’t find fame, you may find a promising partnership.

Online storage is key, and you’re going to need plenty of it. Many sites run monthly specials so try to snag as many of those as you can. Dropbox, Skybox and Google Drive are all good options. There are applications that can be used to combine all of your storage into one, such as otixo.com, or jolicloud.com, which is free if you promote it on social media. Who wouldn’t trade a little wall spam for free storage?

This is nothing new; I mean, look at the Biebs. YouTube is your free virtual agent, whether you’re hitting the self-promotion hard, or on the hunt for a new addition. A Mumbai based guitarist/singer/songwriter and a Norwegian guitarist/bass player “met” on YouTube in 2012 to form the band Spiral Shades. Not even a language barrier or interaction that never went beyond Google Chat could keep them from releasing an album.

While Facebook and Instagram seem like an amateur outlet for every singer, musician and self-proclaimed model, they, like YouTube, traffic more users than most sites combined. General hashtags might require some digging, but there is a lot of talent buried underneath the scantily clad wannabes and passenger-seat serenades. Promote yourself and search away.

Let Go Of Your Inhibitions

Online collaboration allows you to show your talents in the comfort of your own space. It removes the pressure and insecurity that can sometimes accompany new artists. This isn’t an open mic night with a crowd of rowdy college kids. This is you and your computer. Let’s be honest, the two of you have probably done worse things together.