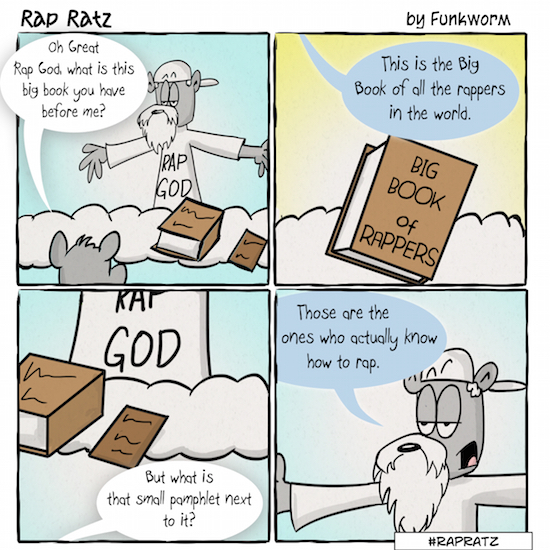 Rap’s renaissance man fuNkwoRm heads his own site, Indie Hip Hop, a platform for putting unsigned hip-hop artists on the map. There, he hosts an open forum where rappers and producers can go and upload their music and share their story with others, as well as drafts his opinions on the culture of hip-hop and the music industry in a comic strip and podcast called Rap Ratz. He’s a professional producer whose love of hip-hop can best be explained by watching Taye Digg’s character in Brown Sugar—trying to keep the integrity of hip-hop intact.

How did you get started on the Indie Hip Hop blog and what were your intentions?
I’ve been running Indie Hip Hop for about six to seven years. I’m a producer by trade; that’s what I do for a living. A lot of artists were having a problem just trying to get noticed and a lot of blogs at the time were only blogging what was mainstream, so I said, Man, what the heck, let me start an independent rap blog. At the time, I was the only blog doing it. Nobody was showing love to independent artists. Once I got it up, it started growing pretty much overnight. My inbox started flooding with submissions. It was a lot for me to handle.

I imagine. What’s it like going through all the submissions?
I don’t post individually as much anymore ’cause I really can’t go through all the submissions. So maybe a year ago, I opened the Indie Wednesday for artists to go on a thread, network and post their own music. Maintaining a blog feels like a full-time job; it’s a labor of love. I was getting very little ad revenue from it but I was just doing it to try and support the cause, trying to support good independent hip-hop.

Tell me a bit about your history with drawing and how did the whole Rap Ratz comic come about?
I’ve been drawing ever since I can remember. Kind of went to college for cartoon animations.

I knew I had a small community. I knew because I was posting some unknown artists, I wouldn’t be getting a lot of traffic because people don’t usually care for unknown people. 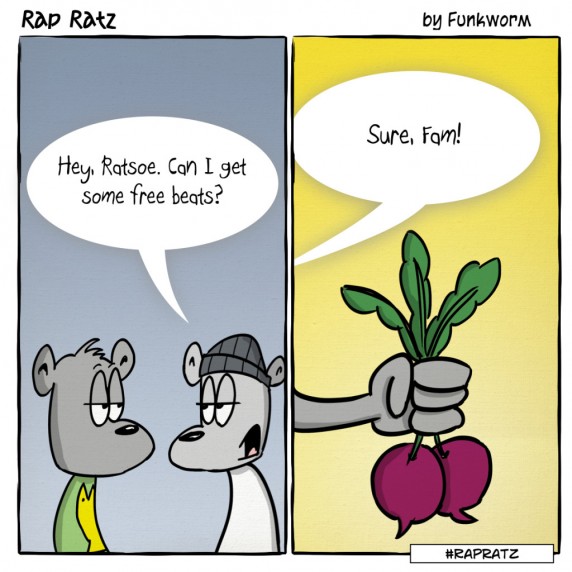 I wanted to add something different. I looked around and thought it was crazy that as influential hip-hop is, there wasn’t a comic strip that represented the culture. The Boondocks, maybe people can connect it with hip-hop; to me it was more like a political cartoon/comic strip about things that the black culture was experiencing. I wanted to create something that specifically spoke to the hip-hop community. The comic, it was a vehicle to express things the way I couldn’t do with my music. So I put up the first comic strip up and it got a great response and I thought “this is cool, people kind of dig this.” I never stopped.

When your passion aligns with your work that means you’re living out your dream. How does social media play into the Rap Ratz project?
When I put in on Indie Hip Hop, I knew there were some people who were going to like it and some people who weren’t. It was important to me to kind of getting Rap Ratz off of the Indie Hip Hop and slowly have it exist in its own world where people are just fans of the comic strip. The first thing I did was create a Facebook page. I wanted to get all the people who are fans of the comic strip all into one place. And I also created a Tumblr page for it. I’m slowly making that transition. Even right now, a lot of the comic strips don’t go on Indie Hip Hop. They may post on Instagram; they always post on Tumblr and the Facebook page. I may make Tumblr the whole central Rap Ratz place.

The move maybe to cross-pollinate across different platforms and if one blows up way more than the others, then you know you’ve found the right home for it.
Absolutely. You know, I just try to explain to artists that you just have to put it out there. I treat these comic strips like my music singles. Put it out there, you’ll find people that dig it and will keep coming back for more. You have to, and success may not be overnight. I mean, I’ve been doing these comic strips for about three years now, over three years. Now, I’m just trying to reintroduce my older comic strips to the public and develop an audience for it.

With the comic strip picking up, I wanted to expand it even further. That’s when I started doing the podcasts. I asked what else I could do with this concept. I have a couple of friends of mine who are in the business. We do this weekly podcast where we talk about the music business every week. We pitch the voices up to kind of sound like rats; it’s pretty goofy and crazy but even that podcast has its own audience.

The podcast reminds me of when the homies get together and gather around. If everyone’s really into it, like hip-hop, it brings more arguments and debates to the table than anything. That’s part of the entertainment value of music and hip-hop. The fact that you can sit down and capture that, and I’m pretty sure it’s just fun conversations between you and your homies. You probably think of a theme and idea beforehand but sitting down, it’s all fun.
It’s like Barbershop talk. I’m sure you know this, but a lot of times when you sit around and talk about stuff, you go like “Wow. I wish someone else could have heard this argument. It’s so funny.” That’s basically what we do.

I’m so thankful for technology now that it allows anybody with a laptop and a microphone to put their ideas out into the world. 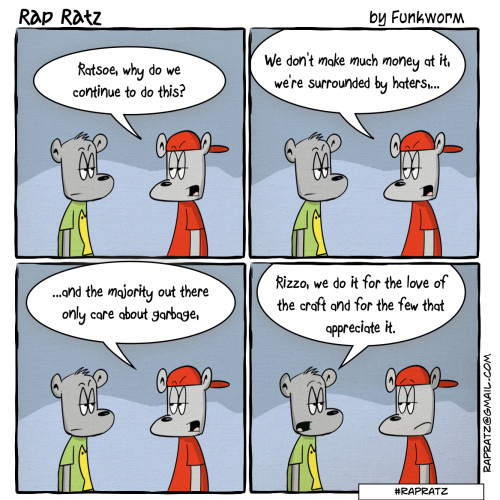 Being an artist yourself, what are some hard things you’ve learned and advice you would give to fellow artists?
This is a thing I still struggle with. A lot of times I may overthink a comic strip, thinking this one is going to be hilarious and the one that everyone’s going to share. It could be the one that gets the least likes and shares or whatever. You really just have to create with no filters.

The only way you’re going to be able to tell if you have something great is to put it out there. Don’t be afraid to fail. If you look at the first Rap Ratz comic strip, it looks pretty bad, man [chuckles]. It looks like my son drew it. Looking at them now, you can see the art has gotten better, the styling got better. I know five years from now, my craftsmanship is going to get better than it is right now.

That’s great advice. Just do it and if you fail, take a lesson from it and get out there and do it better.
There’s a lesson in every failure, man. I trust that and I’m looking for that. Some might say the more times you fail, the closer you get to success. That’s so true. In music, I look at artists like Chance the Rapper; there are rappers who are popular now just from putting out mixtapes. So many cats that got on from putting out mixtapes and now they’re on. That’s super inspirational. They didn’t need a record label or the industry to validate them.

Art should spark conversations, whether you agree with it or not. Good art challenges you to think and sometimes that’s what I want to do with Rap Ratz. I want to make you laugh too but every now and then, I want to talk to this community that I know and love and spark some debate about things we care about.