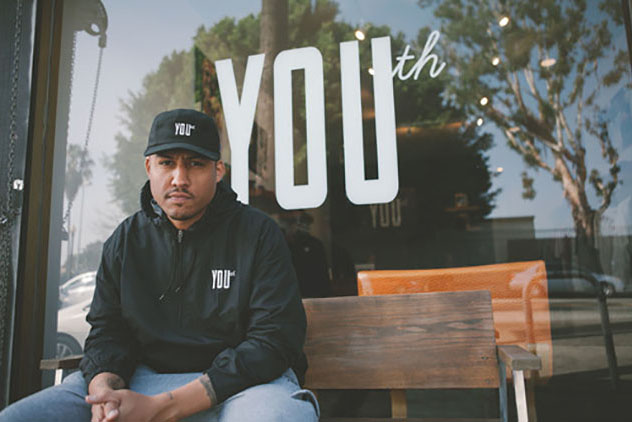 How to Break a Star and Build a Brand, According to YG’s Creative Director

Gavin “Mizzle” McNeill has a knack for branding.

Inspired to further musicians’ careers, he teamed with his brother Fred to launch a cultural movement, dubbed “Just Be Cool.” The two threw parties—with guest appearances from Kendrick Lamar, Pac Div, and Casey Veggies before their prime—and curated artists in the LA area, having most notably discovered and developed four-piece OverDoz.

In 2012, he was approached by YG to develop the LA rapper’s 4HUNNID lifestyle label, which ended up raking in over $200k within its first year of operation. Riding on the success, the creative director’s portfolio expanded, touching the careers of Nipsey Hussle and childhood friend Dom Kennedy.

Now, Mizzle owns the YOUth Store on Fairfax, recently starred in a TV show on Pivot TV called “Welcome To Fairfax,” and continues to build his resume as a creative visionary in hip-hop. We got up with him to hear the highlights of his story, including some valuable advice for aspiring creatives and brand-builders.

YG came to me a few years back, and he wanted to get some merch done. I thought the idea of merch was kind of played out, so I told him I had this idea. I said, “Let’s not just make merch. Let’s make a brand that will parallel your career.” From there, I designed his logo that he put on all of his stuff, and he would rep it with everything he did. I was the designer for the brand, and I made the Bompton hat—just things that represented him and his story. Next thing you know, Bieber started wearing it, and all of these different celebrities wanted to rep YG.

I wasn’t surprised we were successful because I knew people would buy into that kind of merch over, let’s say, a shirt with a grown man’s face on it. I knew people wanted to rep a lifestyle, versus a person.

The designs told more of the story of who he was. That helps. Every little piece of product or content that an artist puts out contributes to his or her brand, and 4Hunnid fulfilled people’s understanding of YG.

The Come Up of OverDoz

After we marketed and branded Dom, OverDoz came to us thinking we were a label or a management company. They told us they needed someone to help them with their marketing, and we had heard about them in LA, so after getting to know them and their story, we really believed in them and we wanted to help them out.

Those are our little brothers; we were involved in their personal lives and their careers. When we started to see their success, it gave us that good feeling that we picked the right artists to work with.

The Power of Just Being Cool

My brother and I started this movement in LA called Just Be Cool, which was a lifestyle movement that was heavily into supporting musicians. Just Be Cool started from a vision I had. I grew up in LA with a big family and lots of homies out here, and I grew up having people in my life who were enemies. My brother, homies, and I were always the cats who were out at the parties, but we didn’t participate in the violent side of the culture. People were wondering how we got the girls and moved the way we did in LA without being from some hood. Our whole thing was “Just Be Cool.” Be yourself, be positive, be progressive.

So You Wanna Start a Brand?

For the creator or the designer, make something that’s true to yourself. Make something that speaks to what you like first. Brands are forever evolving, as you are as an individual. We have to involve with the times and create what’s on our heart.

From a business standpoint, I encourage you to do your research and see what’s out there. See what it takes. Learn about the business. Get internships so you have as much experience as possible going into it.