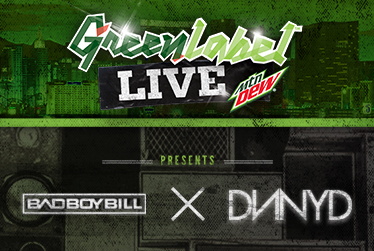 Chicago DJ Bad Boy Bill is known to bring some turntable wizardry to his sets, beat juggling on four or even sometimes six different turntables. Bad Boy Bill came up in the Chicago House scene during the late `80s and `90s and to this day is still doing his thing. If you have the chance to head out to LAX, make sure you get to witness his skills. He’s been dropping highly sought-after and influential mixtape series, and has been racking up awards well into the 2000s—who knows what he’ll bring to Green Label Live: Vegas.

DNNYD will be holding us down on the night of June 20. The EDM producer, DJ, and head honcho of AOMP Records will be bringing some Latin flavor. He’s been on the rise with the release of his banger “Toda Mi Gente” and will be bringing the same energy to Vegas this weekend. He has even teased that he’ll be dropping some unreleased tunes while out at Green Label Live: Las Vegas.

Doors open at 10:30 pm and the show gets cracking at midnight on both nights. Dress code will be enforced so make sure you roll through looking dapper. Ladies get in for $20 and dudes for $40, but entrance isn’t guaranteed so make sure you RSVP here.