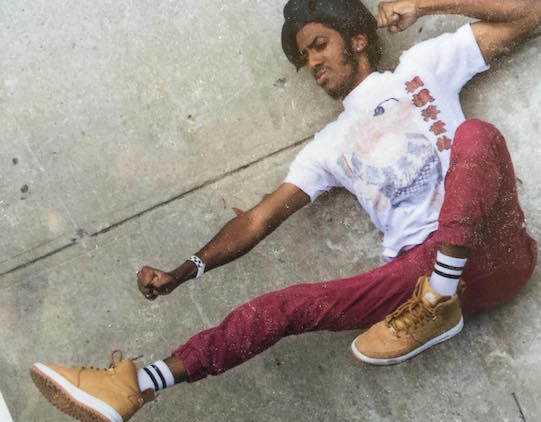 Word of Mouth: Jameel Bruner of The Internet Has Worldly Taste And An Affinity For Anime

Though Jameel Bruner now spends most of his days crafting new music with his Grammy-nominated band, The Internet (they’re currently working on a remix to Scarlett Johansson’s “Trust In Me” from The Jungle Book soundtrack), or preparing new merch for his online store, Kintaro’s Yardsale, he still finds time to enjoy a bunch of diverse culture.

Sam Gellaitry is a DJ—I don’t know if he’s from the Soulection collective, but I know he’s associated. I think he’s one of the Titans of producing. He’s next level, and he’s current; he’s now. Anybody from Soulection, that’s really what I’m into right now. Other than that, I’ve been listening to a lot of Marcos Zallé [whom Bruner discovered through his big bro Thundercat]. He’s a Portuguese singer, and he’s really next-level, too.

If you want some of everybody’s talent in the palm of your hands, go to Amoeba Records,  in Hollywood, on Sunset and Cahuenga. They will have all the talent you would want to eat or drink, ever. It’s a record store and it has DVDs, vinyls, CDs, 8-track, cassette tapes, VHS—everything that you could think of that creatively was output at one point in history is there.

I hope everybody knows about Gundam Wing, or Mobile Suit Gundam Wing. I’m a big anime fan. If you like watching people inside huge robots tear stuff up, then you definitely want to check out Gundam Wing. Japan has a couple of [Gundam statues]. The one that we saw was the one that was like three- or four-stories tall. It was over-the-top. The plaza we were at was DiverCity Tokyo Plaza. I don’t know necessarily where that is, but oh my gosh, that was such an experience. I can’t believe I was there.