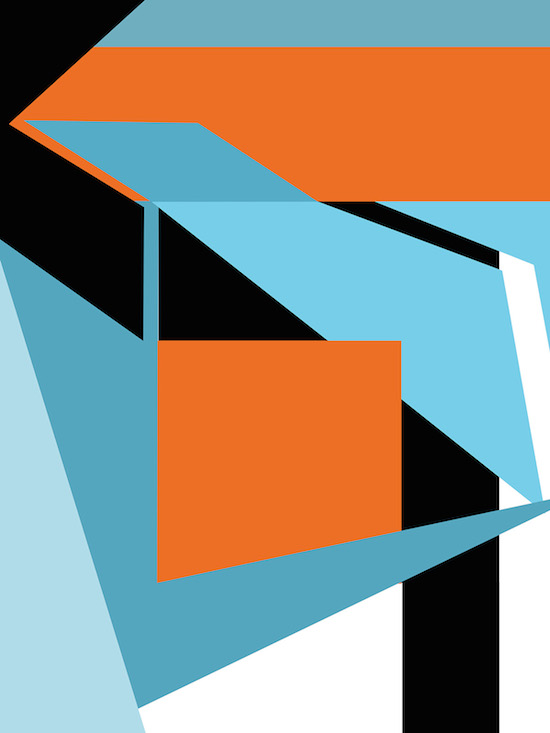 Mick Jenkins’ “Waves” EP Has a Painting for Every Track

I’m a painter originally from St.Louis but I’m currently studying Graphic Design at the Kansas City Art Institute. Even though I’m a student, I still consider myself a professional, active artist, so I do a lot freelance work as well as art shows both locally and out of town.

My work is based heavily in color and form, so I use those two things to create feelings and moods within my work. Right now, I’m working toward implementing my digital design knowledge into the work I do as a fine artist and blurring the line between the two.

As far as getting connected with Mick, that came about from him creating a post on Twitter saying that he was looking for a painter. I happened to post my website with my work on it, and he selected me as one of the people to create a piece. I actually learned later that he had chosen a few other people at the very beginning as well, but he narrowed it down and chose to have me to do all the work for the album.

I wanted something that would visualize the different moods that the EP was bringing. So. all the different shapes and directions that they go in really represent that flow of energy from high to chill and the back and forth that happens between the two. The colors just reaffirm that concept. 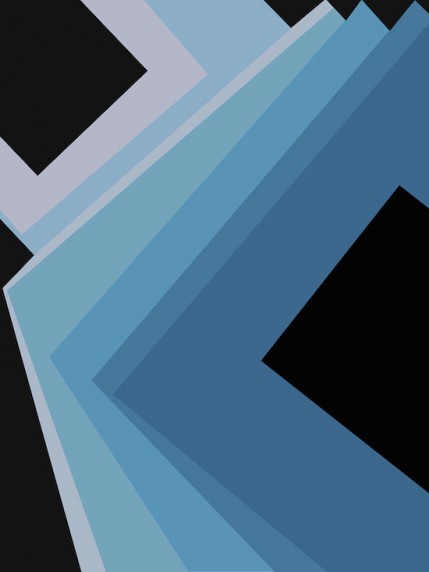 Just from listening to the lyrics of the song, it brings up the idea of two people becoming distant from each other and how their interactions change and grow cold. I wanted to give that idea of a separation or a drifting away of two things through the play on perspective and color. 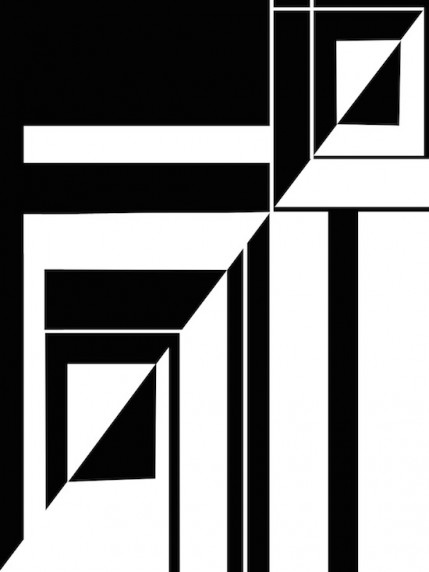 Immediately I was intrigued by the title and content of the song. Just the idea of perceptions and how each individual perceives the world differently and how that can play out visually. So to push that idea, I created a design that would really play with the viewer’s eye. Is it black on top of white or white on top of black? Just to get the viewer thinking about the different ways they could look at this piece. 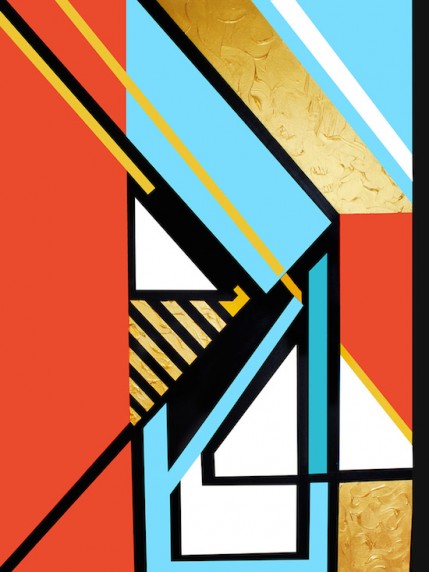 I was inspired by how the beat moved in this song. Some parts of the beat sounded like it was chopped, so I wanted to really get into that idea of breaking the piece down into different sections (like how the song is). Then thinking about how visually interesting it would look if I pieced the different sections back together in a way that looked almost like a collage of different paintings coming together.

“Slumber” was one of those really energetic songs and I wanted to capture that energy. My favorite part of the song is in the intricate drum work that was going on in the back. I wanted to juxtapose that intricacy with a design that was more simple and all about the color rather than the shapes. I wanted to use rejuvenating, vibrant colors that would give you a feeling of inspiration just like the instruments and lyrics did. 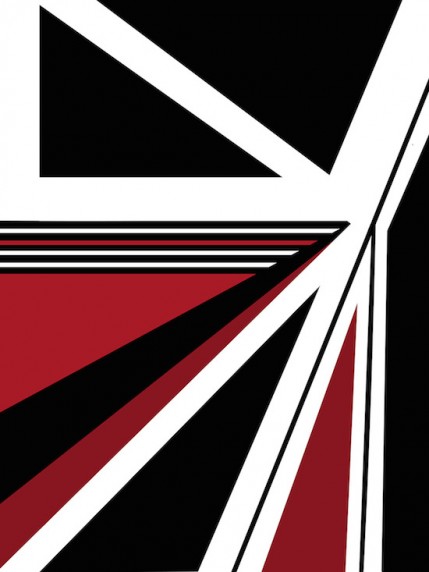 When I first heard this song, I knew I had to create something that matched the high level of lyricism in this song. The delivery of the lyrics to me was very sharp and you could here the seriousness in it so I wanted to make a strong design that gave off that idea through very sharp clean line work and simple but powerful color choices. 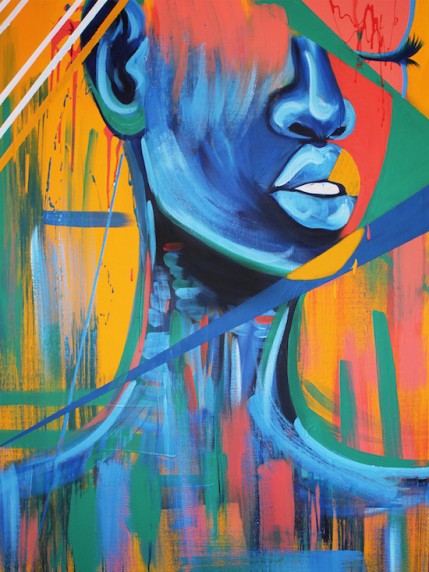 This was the first piece I actually did out of the series. Originally I am a portrait painter, so for this song I couldn’t help but visualize the girl that he might have been talking about in the song. The color choices and how I abstracted the face were based on the dreamlike quality that the song carried, and I wanted to show that through my color and form. 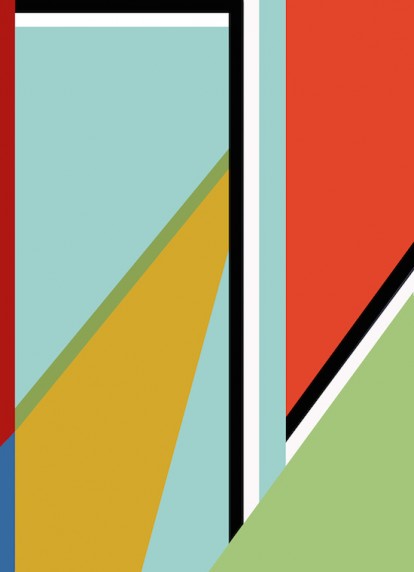 This was another one of those high-energy songs like “Slumber,” so again I wanted to visualize that energy. With this one I was more concerned with how the shapes were moving than the color. Color was important but it was the upward motion of all the shapes that I wanted, signifying the idea of a constant raising of energy and momentum. 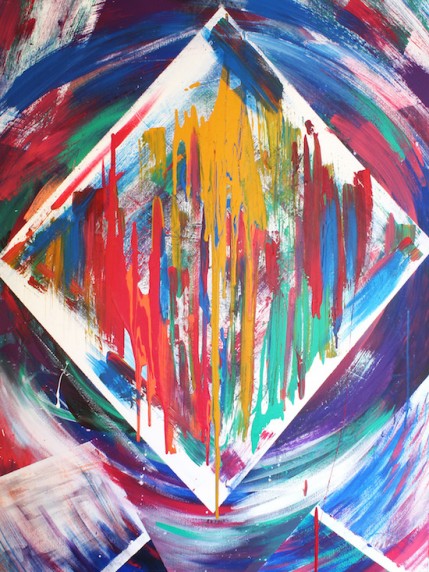 This song sonically just gives you a feeling of being in love and I thought about what if love was a drug? what type would it be? and I thought of it as a psychedelic! So this piece really shows that daydream or dazed/dreamy state that the feeling of love can give you and the visual effects that you would experience. 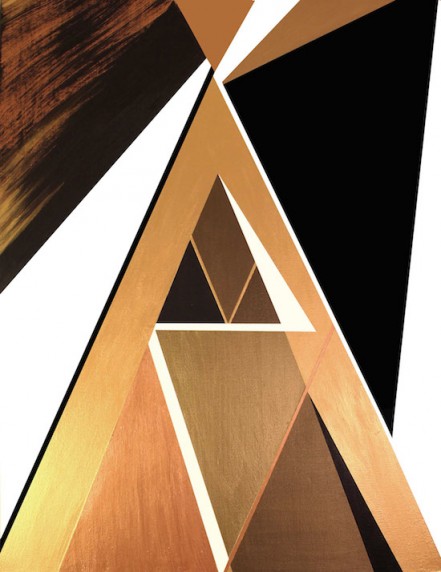 “Alchemy” was a piece that was very conceptual just based off the topic. Turning something into gold! So I wanted to play on that idea through symbolism. In ancient Egypt, the pyramids were historically a symbol of the sun because the shape of them mimic the sun’s rays. In doing research, I also found that metals are often connected to the different planets and stars, and the sun is connected to gold. So one concept just seems to naturally play into the other, and that’s where the design came to life.