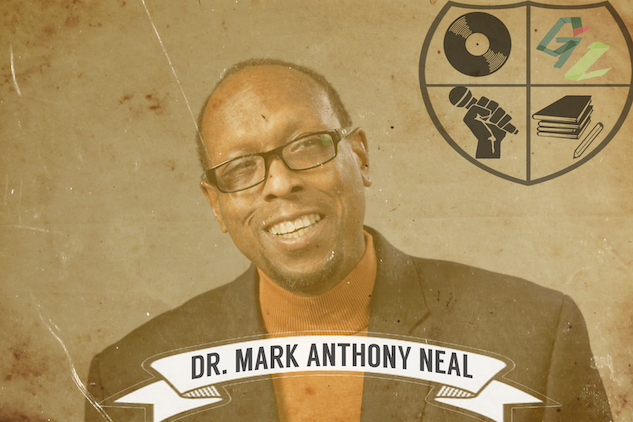 Mtn Dew Black Label, a carbonated soft drink made with real sugar, crafted dark berry flavor and herbal bitters, would like to suggest an “alternative” lifestyle for college students: one with a touch of class. That’s right, there’s no reason you can’t make your four years of college an exercise in refinement, giving you an advanced degree in “Swagonomics.”

This week we have Dr. Mark Anthony Neal, a professor at Duke University in the African & African American Studies Program.

Dr. Neal first started teaching courses on hip-hop in 2001, and is the author of books like New Black Man and Looking for Leroy: Illegible Black Masculinities. He has taught a broad selection of hip-hop courses, and he currently teaches a course on the history of hip-hop.

What would you say is your favorite class to teach?
The History of Hip-Hop. One, because I get to teach it with 9th Wonder, and two, because it’s a very large class. We typically get around 150 students, and it’s the most diverse course I teach at Duke in terms of racial diversity, but also in terms of the things students study. While I would typically see in my classes students of the humanities or social sciences, this is the only course where I’ll see engineering students and hardcore science geeks.

What do you think draws them to the subject?
With a lot of the science and engineering students I think it’s because we teach the class in the spring, and it’s typically their last semester. So they’re done with a lot of the engineering requirements and have a little more freedom with what they can take. It gives them an opportunity to be in a classroom setting they haven’t been in before. They actually contribute a lot to the class because they bring a new perspective to the conversation about hip-hop.

That’s interesting because so many people say that we shouldn’t focus on music and the arts and instead get students to focus on STEM and science, and you’re saying that it seems like they get a whole new perspective on those fields through a scholarly look at hip-hop.
Yeah, because the class does a couple of things. In addition to talking about the broad history of hip-hop and who the major figures are, it’s impossible to teach the class, at least the way we do, without addressing a significant amount of American history and specifically African-American history since World War II. So it’s a class where we get into a lot of… I won’t say contentious, but spirited conversations around things like race, about gender and sexuality. In some ways hip-hop is a way to bring them to the table to have these discussions they might not be willing to have except for the fact that they’re having them around a table called hip-hop.

So it’s basically them saying, “I don’t want to talk about race or sexism, but I’ll talk about it as part of hip-hop?”
Yeah, and you know when you start talking about hip-hop and the historical context of hip-hop there’s no way to not talk about it. And it seems like every year we teach the class something will happen that puts it at the forefront. Two years ago it was Macklemore’s Grammy over Kendrick, and last year it was Iggy Azalea and the responses to her. So I think they come to realize that they may not want to have these conversations, but it’s impossible not to if they want to have a serious conversation about hip-hop.

Are there aspects of hip-hop culture you haven’t tackled in class yet you want to?
With 9th being here we’re hoping to develop something more broadly, something more like a curriculum, not quite a major. Something that gives a broader coverage of hip-hop culture. History is just part of it. We’d like to do courses that address it on a musical level in terms of paying attention to what happens musically. Obviously there’s a way to teach the course solely looking at lyrics from a more literary standpoint.

For me some of the more interesting discussions in hip-hop are about things like gender and sexuality. What do you do with a figure like Drake? However you might feel about Drake he represents a different performance of masculinity than, say, Ice Cube or Dr. Dre 20 years ago. Even in hip-hop now Drake represents something very different from, say, J. Cole, but yet they both can be platinum-selling artists. What’s happening that at least hip hop fans see black masculinity as something more complex and diverse than what we’ve seen in the past?

What’s the one thing your students are most surprised to learn?”
Probably not one thing, but about the class in general, that’s there more to hip-hop than beats and bars.

What’s your favorite academic theory related to hip-hop?
Really early concept expressed by Tricia Rose in her book Black Noise (1994), where she talks about “flow” and “layering” as the concepts that give hip-hop its artistic complexity.

Which hip-hop figure is your favorite, and what is their significance?
I’m a BX cat, and I’ve been listening to hip-hop since it was still in the park in the late 1970s. First time I heard Rakim, KRS-One, Chuck D, and Lyte, it changed everything for me. But if I had to focus in on one figure it would have to be ‘Hova—the swag, the flow, the longevity, the business acumen, the vision.