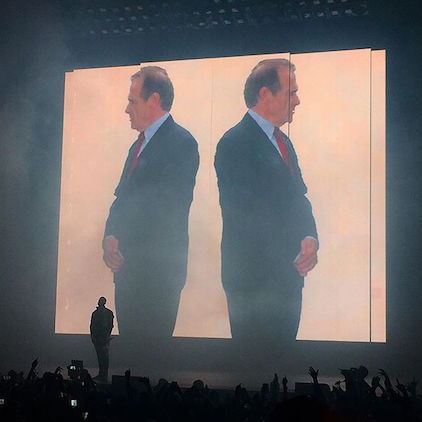 Norm Kelly’s now-famous tweet informing Meek Mill he’s no longer welcome in Toronto has gotten over 135,000 retweets, and he’s even gotten the vote of approval from Internet darling Lil B. In turn, he has gained at least 64K followers since the feud, and now has more Twitter followers than his city council constituents’ followers combined.

He’s become bosom buddies with Drake, being invited to and shouted out at OVO Fest as the rapper performed in front of a large backdrop of his image.

Just this past weekend, Kelly was brought on stage during Future’s performance at Ryerson University to stand back to back with the “6 God,” who also performed.

Last week, the councillor yet again threw jabs at the Philadelphia rapper on the anniversary of The Fresh Prince of Bel-Air:

“On this day 25 years ago, The Fresh Prince of Bel-Air debuted. The show starred Philadelphia’s best rapper to date—Will Smith,” Kelly tweeted.

Rappers have responded by sending Kelly their music in search of a record deal.

According to his Twitter, followers have been requesting he drop a mixtape.

Although he has declined for now, he did attend King Of The Dot’s World Domination 5 rap battle to wild applause, and was named in a punchline bar or two.