The year is 1989. Three spandex-clad dancers with asymmetrical ’80s hair stand in formation on stage, heads bowed. An alien-like voice plays, trails off, and suddenly, MC Hammer explodes from stage left, wearing an all-white suit, to the strains M.C. Breeze’s “Superbaad,” overlaid with the DJ’s live scratches. Chants of “Go, Hammer!” ensue, and Hammer obliges with energetic spins and pumps.

This would be the first of many appearances for the rapper on The Arsenio Hall Show, TV’s late-night potpourri of hip-hop and R&B alongside Hollywood’s finest. It was a mark of MC Hammer’s influence on ’90s pop culture, one of the first examples of hip-hop’s appeal to the mainstream, viewed by millions of viewers across the country. That same magic would reach a young Chancelor Bennett (now known as Chance The Rapper), who would grace that same stage 24 years later, in December, 2015.

salute I had a recorded episode of you Host/music guesting on SNL that i watched since I was 10 you a inspiration https://t.co/0nUZO99ZrV — Lil Chano From 79th (@chancetherapper) December 15, 2015

“I feel the guys at late-night understand how powerful hip-hop culture is at this point. We speak to an audience that they could never reach, and that’s the same audience who was instrumental in getting the first black President elected.”

In the late ’80s through the ’90s, outlets like The Arsenio Hall Show, In Living Color, and Martin were the sole platforms that provided a voice for disenfranchised hip-hop artists. And while legendary show Saturday Night Live has recently boasted guest spots from Future, Kanye West, and Chance in three months, there was once a period of time when rappers didn’t perform on the show at all. In fact, during SNL’s rap drought from 1988-1990, artists like MC Hammer appeared on Arsenio not once, but three times.

Rappers are the new rock stars.

So, what’s changed? As the great Shawn Corey Carter once said, “Men lie, women lie, numbers don’t.” And neither does the pulse of pop culture—the Internet.

“I mean, it’s kind of undeniable, right?” says Eli Brueggemann, musical director and composer for Saturday Night Live. “I think that our show is defining what music is cool less than in previous generations of the show, and we’re kind of following it a little bit more now. Very rarely does SNL break a performer. Sometimes we’ll give a performer a platform that gives them wider exposure. Now with pop culture, it’s like the choices are pretty obvious.”

Before, rap had to play catch-up to reach the exposure of other pop-friendly genres; the more rappers invade mainstream charts and dictate the “cool,” the more network execs in late-night-TV are, more than ever, forced to acknowledge the reach of hip-hop culture.

“Of course you have to put Wiz Khalifa and Charlie Puth on the show to sing ‘See You Again’,” says Brueggemann. “It’s larger conversation in pop culture.”

“The people that Lorne [Michaels, SNL’s creator and producer] has brought in to book the talent are all fans of underground stuff, so he has the right people in place continuing what he’s been doing on SNL,” he adds.

Rap is all grown up now.

Brueggeman also thinks the music has gotten better. “I mean, I’m biased because I’m a musician; I’m a music-maker,” he says. “I think that the music has become way more musical and original, you know? The beats are killing now, and you have real, honest-to-goodness musicians who are able to study the history of beat production and study maybe a little bit of jazz. You’re seeing all of these musical elements come together in very compelling ways, and you have people like Kanye West constantly challenging [him]self to make something different than the last thing that he did.”

“Any time Kanye comes on, it’s kind of an event,” says Brueggemann with a laugh, “and he knows that and he plays into that. But as much as I’ve got love for him, I get more excited when—I keep bringing back his name—a guy like Kendrick comes on and brings great musicians on stage with him and changes the paradigm.”

Brueggemann, who’s familiar with Terrace Martin, Thundercat and Kamasi Washington from his days as a jazz musician in LA, says one of his greatest memories in late night was meeting Kendrick with Dr. Dre after the release of good kid, m.A.A.d city. “His two performances on our show changed people’s minds about what rap is,” he says. 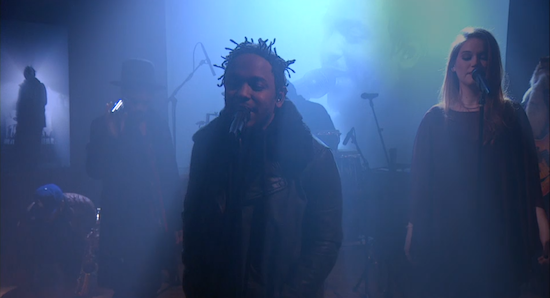 The late-night stage is a rapper’s freedom.

As rappers continue to explore all of the art’s potential, the late-night stage, then, becomes an artist’s platform to display their artistry in one of the most intimate forms of connection to their audience. It also shows the mainstream masses and conservatives that rap isn’t just a one-trick pony, from Kendrick’s reprise of Method Man’s half-done cornrows and black eyes; or Kanye’s inclusion of a gospel choir, an elaborate set, and all the guests he could cram onto a snack-sized stage.

This space allows rappers to reclaim their voice, even speaking on current social issues to a mainstream audience, like when J. Cole performed the Eric Garner/Mike Brown tribute “Be Free” for the first time, on The Late Show With David Letterman. Here, you get the viewers’ undivided attention, uninterrupted by prompted applause, and occasionally get lost in the moment.

The late-night stage is now a rapper’s lifeline to freedom. Here, they can control their own marketing, subvert ideas of “underground” music (even Flatbush Zombies made it to Last Call with Carson Daly), and give fans and new listeners a glimpse into their innermost feelings in the absence of MTV’s Unplugged. While the late-night talk show couch represents the artist America wants them to be—forced to laugh at awkward jokes and discuss art only superficially—the stage represents who they really are: just an artist dying to “be free.”