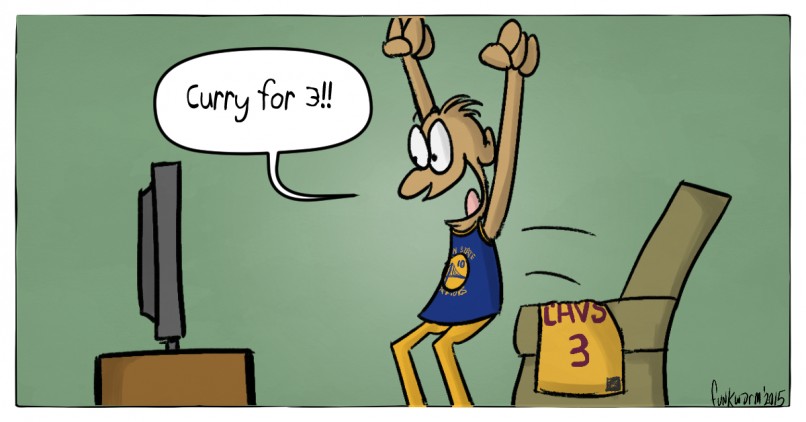 The Bandwagoner’s Guide to Etiquette: How to Start Loving a Successful NBA Team

It is generally understood that there is no form of life lower on the NBA fan totem pole than the bandwagoner. The bandwagoner becomes an ardent supporter of a team only after that team becomes successful, and is quick to abandon the cause when things go south. Or they simply fade away with time.

This, it is said, is the cardinal sin of being a fan. You must take the bad in order to earn the good.

That being said, when a team starts going strong and fan-fever hits, some people want to join in on the excitement. If you’re going to be a bandwagoner, follow these simple rules. If you wear that Golden State Warriors jersey, you need to be showing respect to the same long-time Oakland residents who do.

Blasting your Facebook wall and Twitter feed with posts about how much you love the Cavaliers, after years (or an entire lifetime) of silence on the subject will only draw suspicion and pushback. Start slowly by posting links without much commentary or wait until you have a more educated opinion (see below).

Flipping on sports-highlight shows every once in awhile, or checking the box score just to see if your new team won or not, is not enough. Neither is passively glancing at a game while it plays over your head at the bar. Follow a few team-specific sports blogs and zero in on specific trends, schemes or players when watching them play (for example: does your team run a lot of pick-and-rolls? Does your star player look like he’s forcing shots?). This will give you some concrete reference and talking points (“Have you noticed how Westbrook is moving the ball lately after he comes off the pick? There’s a great new article about him on Welcome to Loud City, too”) rather than generic statements like “My team is doing great.”

Long-time fans will stump you when they bring up the 1997 playoffs or the 2005 draft and you have nothing to contribute. Be upfront about your recent change of heart and it’s more likely that you’ll be welcomed as a new convert. Though acceptance, especially in the short-term, is far from guaranteed.

Just like taking a pledge, allow yourself to be heckled, shamed and even insulted, for it is under duress that our fandom grows stronger. Ask any Boston fan living in New York.

It’s about you, not them

Want to piss off a long-time fan of a team like the 76ers or Kings? When arguing with them, tell them that rooting for a team that fails all the time is stupid, and that sports is supposed to be about having fun. Nothing is more blasphemous to a lifelong fan who supports the team in seemingly neverending bad times. In their mind, they are the opposite of you fair-weather-fans. Never make this argument.

Did you jump on the New Orleans Pelicans bandwagon before this season because you heard that Anthony Davis was about to take “the leap” and the Pelicans seemed like a good, young team to get behind before they take off? How’s that worked out for you? If you’re going to start liking a team out of nowhere, make sure it’s one that has some promised longevity (good bets for the near future include the Warriors, Spurs and Cavaliers). Nothing will look worse than repping one team, only to change course within a couple of months. If you’re gonna bandwagon, do it right and pick a good franchise. Or not. Whatever. You’re the bandwagoner after all.

There isn’t a set number of games you must attend, or watch on television, before you overcome your “bandwagoner” status. For example, Kate Upton has probably been to more Knicks games in the past few years than many lifetime New Yorkers, but she’s not more of a fan than Benny from Brooklyn. But you need to watch. You need to get a sense of what actually makes this team good, and worth rooting for. Otherwise, you’re just a walking internet message board comment.

It is possible, though not common, to simply love the game of basketball enough that you transcend typical fandom and swear allegiance to no team in particular. You want to watch the best basketball possible, and if that means pulling for the top seed in each conference to meet in an epic NBA Finals, or rooting for the best team year after year because you’ll be a witness to greatness, so be it. Yeah, try that.