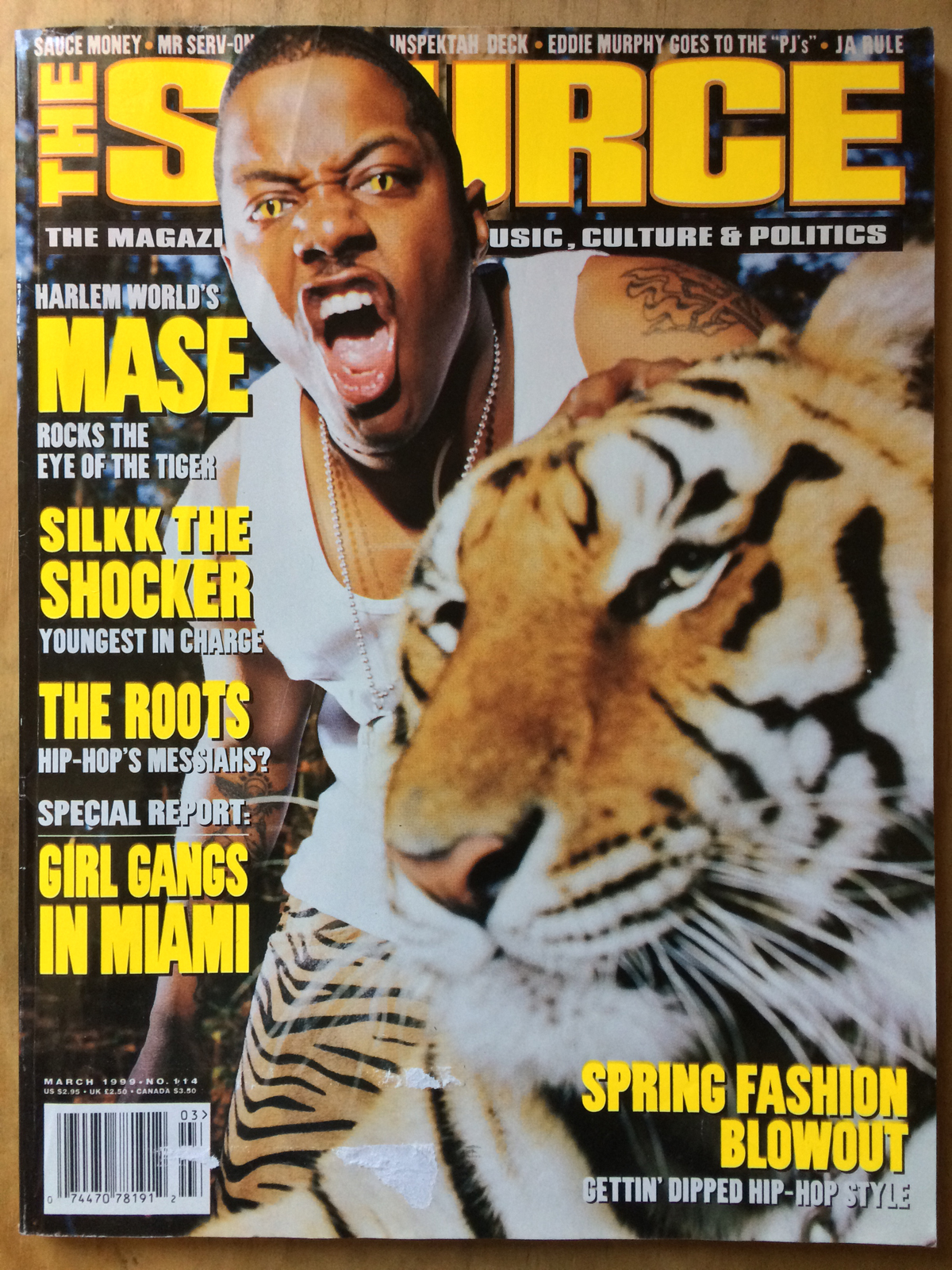 We Revisited a The Source Magazine From 1999, With Stretch & Bobbito, a Young A-Trak, and Mase On the Cover

The most important decision you make in life isn’t who you love, or where you work, or whether to observe specific religious practices; it’s whether or not you choose the lustre of jigginess, or the grit of street cred. In March of 1999, The Source put Mase (and a living, breathing tiger!) on their cover, and the Harlem rapper, the Crown Prince of Jigginess, explained with stately reserve his reluctance at such an exalted position: “See, I feel that I’m like Jesus, yo. I walked in all this shiny [stuff] so cats wouldn’t have to.”

Simultaneously, Mase was attempting to put his glossily-attired past behind him while maintaining his friendship with the man who put him in the bespoke, shiny suits: Puff Daddy. Such was the climate in rap–jiggy rap had helped to fund the growing Bad Boy empire, but it was experiencing backlash which colored it as empty and substance-less. And nothing was more jiggy than Puff’s practically unaltered sample loops and Mase’s giggling, playful flow. It’s understandable that Mase would want to distance himself from the Louis-XIV-lifestyle rap; his childhood partners, most notably Big L and Cam’ron, were making hardcore music while he was dancing in his music videos. He had riches, they had street cred. He couldn’t have both.

It’s hard to say whether or not Mase’s Faustian bargain was worth it; the music industry was at its most profitable in the late ’90s, and the rewards for making a popular song were greater than they would ever be again. The ostentatious wealth generated by impresarios like Puffy and Master P helped cleave the divide between rap perceived as “mainstream” and rap perceived “underground.” The Source, the rap magazine of record, found itself in the middle of the fray.

“Besides Stretch and Bobbito’s heralding of unconventional rap tunes, it was the two’s different tastes in hip-hop that made their show exceptional. Bobbito’s penchant was for breaking avant-garde, lyrically complex artists like Juggaknots, Company Flow and Black Star, while Stretch preferred purveying thuggish-leaning, commercial-savvy hip-hop such as Noreaga, Jay-Z and Nas. But, according to Bobbito, it was the differing preferences that would eventually cause the split.”

The importance of DJ Stretch Armstrong and Bobbito’s radio show on Columbia University’s 89.9 WKCR can’t be overstated: it was the greatest rap show ever. Bobbito’s Nuyorican accent, Stretch’s DJing, and a host of legendary and not-so-legendary guests made their eight year run a must-listen. The freeform, unhinged vitality of the Stretch Armstrong and Bobbito Show was key–without rules came the ability to break upcoming artists. Jay Z, The Notorious B.I.G., Nas, Mobb Deep, Big L, Cypress Hill, MF Doom, and the Wu-Tang Clan all, to varying degrees, owe their fame to the show.

According to The Source, a rift caused by differing tastes in rap was deepened when Hot 97, New York’s dominant rap station, gave the duo a show. Bobbito grew unhappy with Stretch’s music selection on Hot 97 and decided that, rather than continue working for both WKCR and Hot 97, he’d resign his role at the larger station and they would alternate weeks at their original home. The split, which was theoretically amicable, ultimately ended the show. Stretch (who had his own, brief label, Dolo Records) continued his successful DJ career, while Bobbito, who was already running Fondle ‘Em Records, became something of an ambassador for his second love, streetball. Fortunately for those too young or too geographically distant to listen to the show’s heyday, dedicated fans have uploaded countless episodes to otherwise sparse Blogspots and Soundclouds.

“Overshadowed by Toronto and Vancouver until recently, MTL [Montreal] got on the map big time in 1997, when then-15 year old A-Trak took home 1st place at the DMC worlds (he finished 3rd overall this year), impressing judges and spectators alike with highly technical routines.”

A-Trak has been many things. He’s been Kanye West’s DJ, a Grammy-nominated producer (as half of Duck Sauce, alongside Armand Van Helden), a record label founder (Fool’s Gold is soon to enter its second decade), and a mega-corporation spokesperson. Before the fame, he was just an insouciant, diminutive teenager, swimming in baggy clothes and flipping the middle finger to the Technics-DMC World Championship crowd.

While other competitors came equipped with gimmicks, the precocious A-Trak came equipped with a self-invented vinyl notation system and spectacularly nimble digits. His win at the 1997 championship made him the youngest champion ever, for which he lifted a pair of gold-plated Technics turntables. It began a career that far outpaces other turntablists of that era.

“Who knew Louisiana was so warm in the wintertime? Already December, the temperature still hovers around eighty degrees and the air lays thick like a simmering pot of crawfish gumbo. A poet might deem it a lazy afternoon; however, for the members of Beats By The Pound, Master P’s No Limit production team, lazy days disappeared long ago…On this December evening, it’s Silkk The Shocker’s turn at bat, and after having pushed more than two million units of his sophomore release, Charge It 2 Da Game, the expectations for Made Man…are sky high.”

Made Man, like Charge It 2 Da Game, went Platinum, but that was probably a foregone conclusion for a No Limit artist in the late ’90s. Master P manufactured success for himself, brothers C-Murder and Silkk The Shocker, and his signees with a few basic ingredients: baroque Pen & Pixel covers, cheap, cardboard-based packaging, Beats By The Pound instrumentals, an unceasing release schedule, and more songs-per-album than major label releases, which included guest appearances by his stable of rappers. Maybe the expectations for Silkk’s third album were “sky high,” but the process by which it was made, combined with the climate into which it was released, practically guaranteed its fiduciary, if not critical, triumph.

“‘Hey yo, I don’t think they ready. I don’t think the public is really ready for what I’m about to do,’ says Mase… ‘Let the consumers know. I got a new group, I got my own label, and I’m coming hard this time…They want Murder? Is that what they want? I’m telling you, son, after this album people are gonna look at Mase and say that kid is for real.”

“That kid is for real” was presumably not the reaction to Mase’s Double Up, his promised return to Murda Mase, formerly of Children of The Corn (his group with Big L, Cam’ron, Bloodshed, and Herb McGruff), which hardly delivered vintage hardcore raps. The Puff Daddy-enforced, blindingly bright suits may have inflicted permanent damage on his career. Double Up splits the difference between the bouncy pop-raps that made him popular and the violent raps of his Harlem roots–it’s neither danceable nor lyrically tongue-twisting. Three months after this issue of The Source hit newsstands, Mase (temporarily) retired from rap to establish a ministry in Atlanta and Phoenix.

“Chili peppers. Lemons. Cod liver oil. These things are hard to swallow. Now add CrazyNDaLazDayz by Tear Da Club Up Thugs to that list….This latest from our boys in Memphis might not even get to see the light of day in tape decks of hip-hop ‘purists’ or on Wal-Mart shelves because–like cigarettes, strong alcohol, and most albums from the Hypnotized Minds camp–CrazyNDaLazDayz requires listeners to have already an acquired taste for the Thugs’ brand of hip-hop.”

Ah, another off-base review of a Southern rap album by The Source. The Source’s tolerance for Southern rap was always limited–it could appreciate the lyricism of Scarface and the perfection of Outkast, and could acknowledge the popularity of Southern acts, but the more absurdist, rougher edges were sometimes a derivation too far for the New York-based staff. In 2012, DJ Paul, a member of both Tear Da Club Up Thugs and Three 6 Mafia, asked Kim Osorio, former Source Editor-in-Chief, why the Triple Six hadn’t received a cover during the magazine’s initial run. Her response was noncommittal. At least they got the cover of Murder Dog magazine.