Nostalgia (Ultra): These Are The Throwback Songs Stars Should Cover

It’s hard to know which generation we’re supposed to be nostalgic for right now. Probably, as ever, it’s the preceding one, because 20-something tastemakers are beginning to filter from memory all the awful parts of being in high school and college.

The’80s and ’90s have received their encomiums, their apologia, and a fair evaluation is that those decades saw the hyperinflation of the music industry, which threw money at both eccentrics and the worst kinds of pap. Some of the record-industry patterns established long ago remain: every label wants a white rapper because they want to move units in Walmart; convincing-enough imposters succeed in the short-term; and fans will overlook halfhearted music if an artist’s fashion choices are thought to be innovative. What’s the difference between Post Malone and Vanilla Ice, aside from a defined jawline? Who remembers Aaron Hall, and who’ll remember Bryson Tiller?

Here are some suggestions for throwback jams that today’s artists should consider remaking to bridge the generational gap.

Despite its now-thriving rap scene and the best efforts of two generations, Dallas has yet to produce a bonafide national star. Well, unless you count Vanilla Ice, whose label sought to brand him as a Miamian; or Post Malone, who’s technically from Tarrant County, a cotton-field-turned-suburb. Although the latter’s career arc is less dramatic than the former’s–few could match Vanilla Ice’s immensely marketable, razor-sharp bone structure–their sales pitches are similar: nontraditional rappers attempting to bend the genre to their whims. It’s only appropriate that Malone drapes himself in a different kind of Ice. 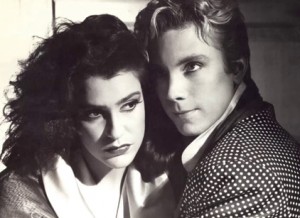 Fetty Wap should cover … The Family’s “Nothing Compares 2 U”

Because Prince refuses to allow reissues of Paisley Park Records releases, few people have heard the original version of “Nothing Compares 2 U” by The Family. While Sinead O’Connor’s (inferior) rendition and its attendant music video made the Irish crooner an international celebrity, Fetty Wap won’t benefit as greatly from Prince’s lyrics—but it’d still be entertaining to hear him warble forlornly about love lost.

Mellencamp is an uncritical goober trafficking in blurry-eyed nostalgia vaguely evocative of (and regularly mistaken for) Springsteen, a bard for landlocked men,” Desiigner’s “Panda,” like Mellencamp’s “Jack & Diane,” will be confused by future generations for the work of their stylistic progenitors.

Action Bronson should cover … Peter Gabriel’s “In Your Eyes”

Gabriel’s pablum was meant to be played at reasonable volumes by musicians in pastel Lacoste shirts, which, in Bronson’s purposefully cartoonish worldview, is the peak of refinement and class. Hence “In Your Eyes,” a song immortalized in Say Anything when John Cusack serenades Ione Skye with his boombox raised overhead. I’d have dumped him immediately.

Had Bryson Tiller been born 20 years earlier, he’d have named T R A P S O U L “N E W J A C K S W I N G”, because combining du jour rap and R&B styles was an innovation long before he put on his first Nike hat. Aaron Hall’s licentious “Don’t Be Afraid” is a New-Jack-Swing standard which Tiller could easily lull–just how his fans like it.

Kris Kross was so fashion-forward that they wore their clothes to the back (with a little slack, ‘cuz inside out is wiggidy, wiggidy wack!). It was a deeply ridiculous—and totally harmless—gimmick that helped make the Jermaine-Dupri-engineered Mac Daddy and Daddy Mac memorable. Rocky’s a good-enough rapper that, were he not a Rick-Owens-clad pseudo-bohemian, he’d still be a star—but his cheese-grater cheekbones and brutalist clothing are something like a signature.

Rihanna and Travis Scott are an odd couple. The former, like Paula Abdul, is a pop star. The latter, like MC Skat Kat, is an entirely fictional character. He’s also a cat. There are umpteen paeans to ride-or-die partners (so many Bonnie and Clyde’s to choose from!), but so few about intraspecies romance. Abdul was truly an innovator in that regard. Imagine the possible hijinks in a remade “Opposites Attract” video: Rihanna, playful and sassy; Scott, an animated tabby cat with a grill. Just like real life.

Before rap truly hit Los Angeles, there was electro. Uncle Jamm’s Army, World Class Wreckin’ Cru, and Egyptian Lover were the city’s Jheri-curl-and-sequin-clad music stars, whose blend of proto-rap and electronic music filled the city’s roller rinks, nightclubs, and venues. YG has interpolated numerous G-funk and gangster rap hits, so covering electro tunes is his next logical, historic step. If anyone has the power to bring roller-rink culture back to L.A., it’s probably him.

Frank Ocean should cover … Morrissey’s “Every Day Is Like Sunday”

Morrissey doesn’t play by the rules. Well, unless those rules are his own, in which case he expects everyone else to adhere and abide. Frank Ocean is similarly obtuse, albeit with a fraction of the melodrama. Were he to try his hand (voice, really) at “Everyday Is Like Sunday,” he’d capture the boredom of waiting for his new album.