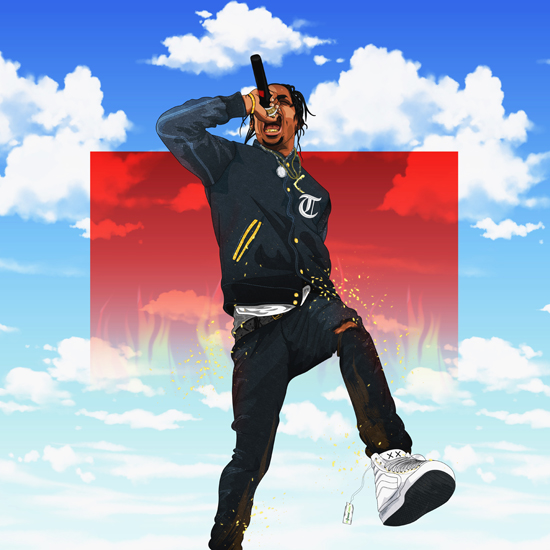 A rodeo is a gathering of folks from all walks of life intent on seeing, being fully immersed in, and at times feverishly participating in the show. If you’ve ever been to a Travis Scott show, the experience is the same.

Scott is a showman that feels an obligation to be the best that he can be at all times, at all costs, and for every single moment that he shares with his fans: the relationship between Travis Scott and his fans is more symbiotic than most.

To some, his rise has been meteoric. They might not get it, but his fans do. Like Rihanna rules over her Navy, Travis Scott has his army of “Ragers,” fans whose fervor he has stoked multiple times, even to his own detriment. Like the time he fought his own security guards to allow fans to join him on the stage. Or when, in Chicago, he was arrested for encouraging them to climb over the barriers. Or the time, in London, he hyped his fans to near-riot stunting on top of a car.

Sporting his Byzantine and glittering trademark grin, Scott leads the way. For his fans, this grin is a sign of the exchange between them and Scott that has taken place. This is all done out of his love for them and their love for what he contributes to the musical landscape. With them being so devout, Scott–who has proven to be a true apprentice of showman Kanye West–feels it’s necessary to give as good as he gets.

Over the course of the year, we’ve been exposed to a softer side of “La Flame.” More than just an entertainer, he’s a shepherd of his herd of enthusiastic sheep. You’ll find him interacting with fans on social media, sharing his love and appreciation; posting countless videos of them singing along to his tunes, with or without him or recapping what an experience his last show was. He has always been something of an enigma, misunderstood and chastised for his sound, but the one constant and public facing aspect of his character has been his appreciation of his fans and how much of that is eclipsed whenever he touches a stage.