Welcome To 2016’s Live Concert Experience, Where The Crowd Is The Show

Nineteen-year-old RG had never been to a Kanye West concert before attending the Saint Pablo tour’s Atlanta stop. Spending almost $350 for his General Admission ticket, he says he only got to see West for 35-40 percent of the show and spent the rest of the time mingling and partying with fellow Kanye fans. And he’d do it again.

“Most concerts, you’re watching the artist, but for the ‘Ye show, it’s more like you’re there for the people; you’re just enjoying being there with ‘Ye,” RG says. “It felt like a party, if anything. I felt like I wasn’t paying for a show; I was paying for an experience. I feel like I met people I’ve known forever, but I had never met them before. Just the fact that we were connected by ‘Ye was enough for us to hug and jump together, or sing along to a whole song together. It was bigger than just a show.”

That night, RG left with re-established friendships, a couple of new Instagram follows, and an opportunity to make music with Atlanta artist (and Green Label Sound winner) Kelechi, who was also in the crowd. West’s actual physical performance was an afterthought.

Who would’ve guessed that in the year of our Yeezy, eight years removed from the Glow In the Dark tour, the sole focus of a Kanye West concert (rants aside) would be the fans and their interaction? Ladies and gentlemen, welcome to the live concert experience in 2016, where the crowd is the show, and if you’re an artist wanting to sell out venues, you’d better be prepared to get the audience involved. Take note. 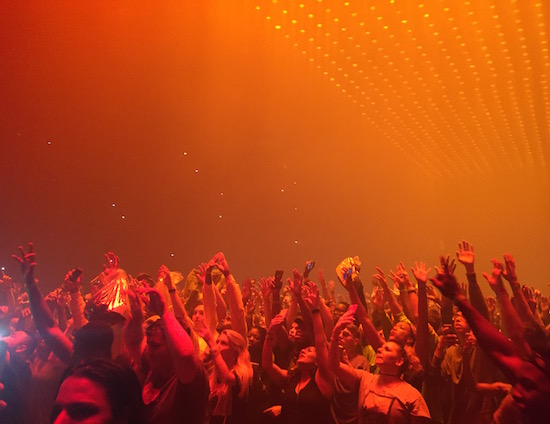 Don’t be afraid to get up close and personal with fans—and the venue ceiling.

Artists like Travis Scott and Tory Lanez are able to constantly sell out concerts because they aren’t afraid to do high-energy performances right in the middle of the crowd. At their shows, as well as those from the Saint Pablo tour, you’re likely to catch fans taking in the music while raging, moshing and crowd-surfing. Best of all, you may even catch the artists hanging from pipes, or in Scott’s case, tree branches, to turn up and give fans something to talk about long after the show. For a lot of rappers, who are usually not true performers or dancers by trade (excluding the likes of Chance the Rapper), this is a great, dynamic addition to encourage fan activity. This also bridges both the literal and figurative gap between performers and their fans, briefly removing them from their pedestal to create memorable experiences through direct engagement.

Deviating from the ordinary, singer Miguel reimagined the live experience with his Wildheart Motel art installation, which allowed fans to roam through 21 rooms, including rooms for jam sessions and karaoke. To appeal to the listener’s different senses, artists may now also want to take cues from Katy Perry, who incorporated smell-o-vision for her California Dreams Tour. If all else fails, or the budget is looking a little slim, artists may sponsor giveaways at shows, like Juicy J’s Red October giveaway, or Action Bronson, who literally tossed out a flat-screen TV, iPods and gaming consoles.

Gone are the days where a rap show solely consisted of a rapper pacing back and forth as the main focus on stage in front of a massive entourage—well, mostly gone. Thanks to Kanye’s epic lighting for Saint Pablo, the crowd gets the opportunity to bask in the limelight too, allowing him to see his fans’ faces and acknowledge their presence—like the now-famous fan with the “Runaway” tattoo and Donda West shirt that made ‘Ye shed tears. This recognition lets fans feel the weight of their importance and share the spotlight with their idols, just like the age-old invitation for a fan to come up on stage and perform an artist’s part. Rappers like Kendrick Lamar often make this a part of their show, and in the same spirit, Lamar has also adopted Jay Z’s technique of acknowledging specific people in the crowd to let them feel special.

Think beyond the show itself.

Taking it a step further, artists like J. Cole and Tory Lanez are also utilizing technology to give fans listening experiences beyond the confines of a venue or shared space. For the release of Born Sinner, J. Cole partnered with the LSNR app to let fans hear the album while present at certain locations, and for Lanez’s I Told You, fans played a role on an interactive site that allowed them to hear album snippets. Such marketing tactics can, and probably will be, used down the line to let fans get a piece of the live action no matter where they are.

The future of live shows lies in the hands of technology.

Pretty soon, fans may be able to dictate the set list for a show or control staging setup all with the touch of a finger (imagine if there was an app that let the audience pick an artist’s lighting color or the next song played). As more artists are letting the fan experience dictate the show, so also arises the opportunity for tech companies to get involved and partner with performers. This could prove lucrative for both companies and the artists, while also giving fans something to keep their already-short attention spans occupied. Who knows—next, maybe fans will not only be the stars of shows, but the creative directors of them too.