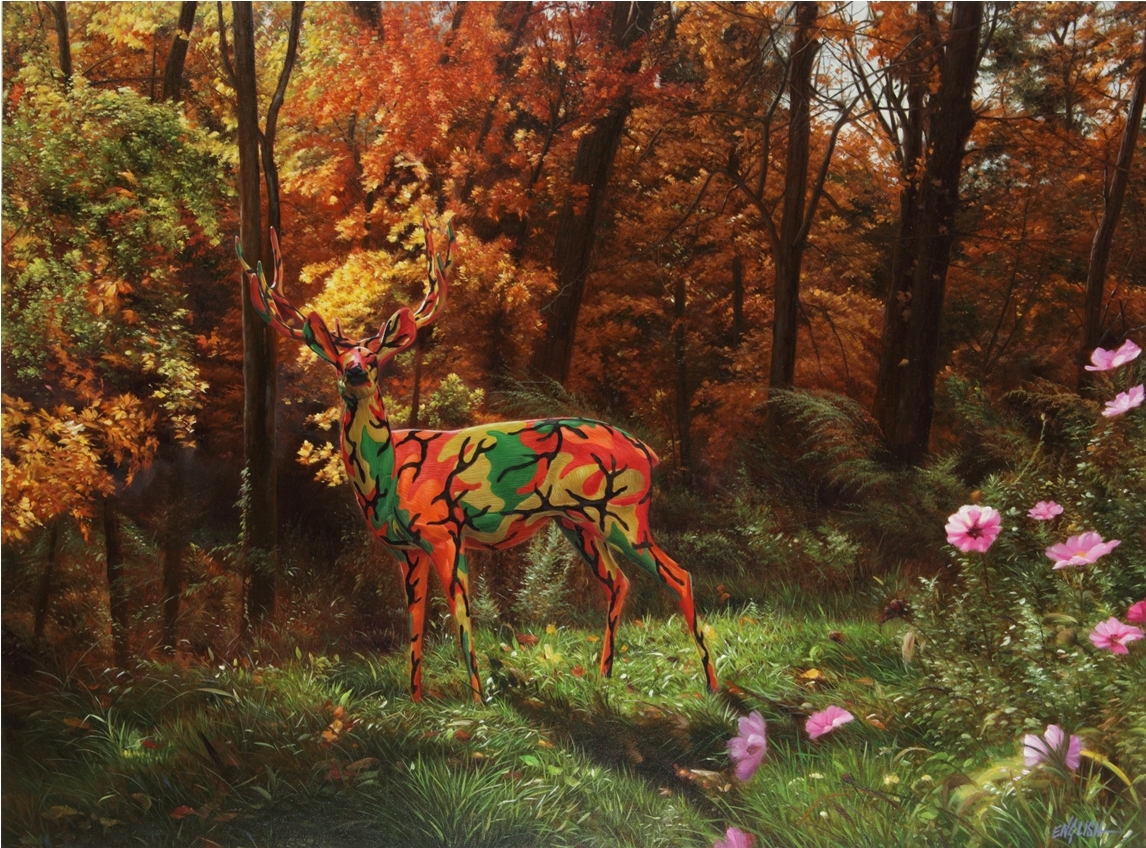 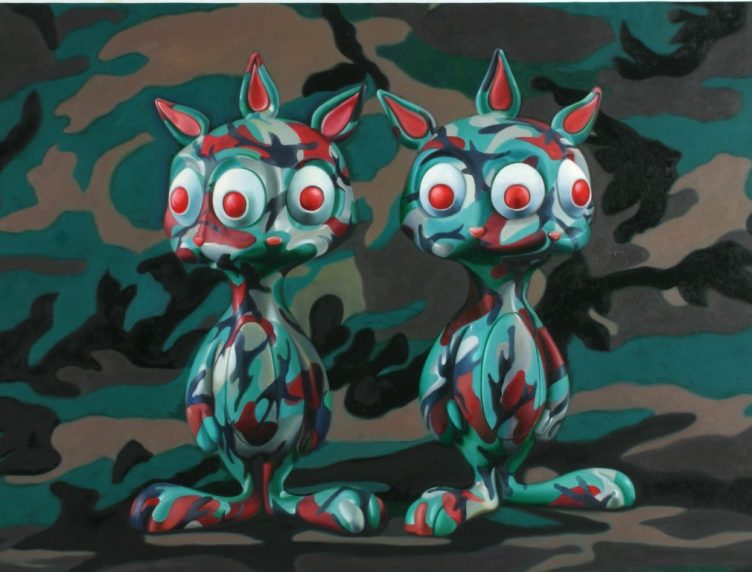 Ron English started wearing camouflage in the early ’80s, around the same time he started climbing billboards to replace traditional advertisements with his own subversive messages.

Back then, he donned army fatigues mostly for practical purposes. They were the only kind of clothes that could fit all of the knives, brushes, and materials necessary for completing the job, whether he was replacing a cigarette ad with a baby version of Camel Joe or covering McDonald’s ads with his now-iconic, obese Ronald McDonald character “MC Supersized.” English quickly became infamous for this bold form of street art, much of which he performed in broad daylight.

Today, English is an art world icon. He continues to display his work in public, but his highly-priced paintings and sculptures can also be found in museums and galleries. He assisted numerous other stars over the years (Banksy and Shephard Fairey, to name a few), artists who’ve legitimized the subversive forms of street art English has been creating for decades. Over the years, English has developed a recognizable cast of themes and characters (baby Hulk, “MC Supersized,” Mickey Mouse) who’ve been fashioned as designer toys, on commissioned murals, and movie posters. And since his earliest days scaling billboards while wearing military fatigues, one of the most recognizable forms of imagery in English’s work has been camouflage.

Aside from the practical use of military clothing, English views camouflage as a way to be more expressive with his fashion. “I’m old enough to remember when men had no design whatsoever in their clothes,” English says. “It was just straight up jeans, black t-shirt, suit, black shoes. It was boring. The only pattern that a man was really allowed to wear was either plaid on a shirt, or camouflage.” He recalls camouflage being popular in Illinois during the post-hippie era, when he and his peers were referred to as “freaks.” “[Freaks] weren’t peace and love. They were a little more hardcore,” English says. “You were allowed to wear military stuff.” 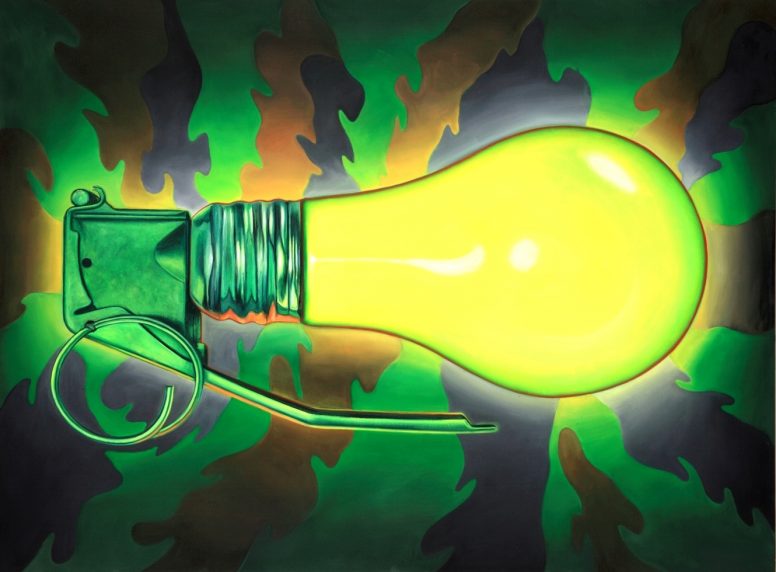 English’s appreciation for camouflage crossed over into his work at an early stage. One of his more well-known billboards reads “Support Our CEOs” atop a blue and red camouflage background. He recently created a collection of camo-clad characters called “combrats,” which he describes as “feral clown kids who live in some weird, bizarre world where there’s no adults and they run the show.” The most striking of the combrats is the “camo clown boy,” a child wearing clown makeup, army fatigues, and a helmet with an upside-down peace sign painted on it. He describes the character’s backstory as a wayward kid who fled home to either join the military or the circus. It’s up for you to decide.

English also created a series of sculptures and portraits depicting camouflaged deer that blend into a background of nature. He has used different colors of camouflage on deer for all four seasons—bright green for spring, darker greens for summer, oranges and reds for fall, and black and white deer barely noticeable in the winter snow. “I thought if anything should be wearing camo, it should be the deer. Because they’re the ones getting shot at,” English says. “They might be the ones whose life would be most enhanced by wearing camouflage.”

The type of camouflage used in English’s deer work, though, isn’t as traditional as the army fatigues he wore in his younger years. It’s much more vibrant. “My own camouflage is sometimes a mixture of plaid and camo, and sometimes it’s just kind of really extreme camo. But it’s always super colorful and pop,” English says.

Last year, English collaborated with Vans to bring his camo deer design to a pair of custom sneakers. He wears his own pair regularly, and claims that he enjoys receiving compliments on them more so than he does on his art. “I’m used to people saying ‘I love your art,’ but if someone just stops you on the street and says ‘I really like those shoes, man,’ they don’t know you made those shoes,” English says. “It’s a pure compliment because they really don’t know that you’re the author of the shoes. They just know they like the shoes.” 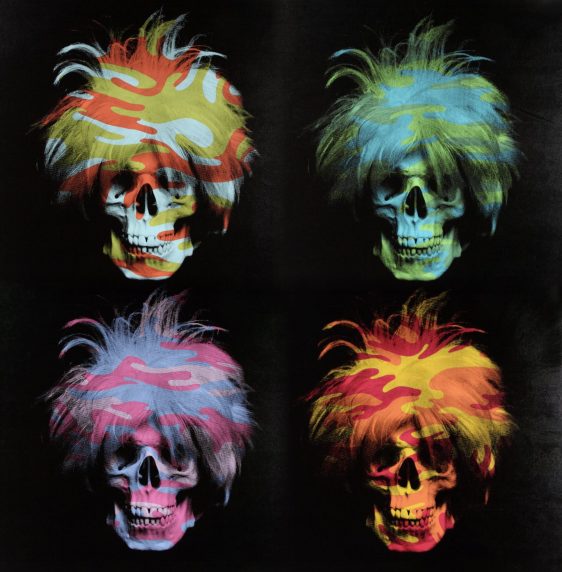 Much of English’s work is appreciated this way: by unaware passerby. As a street artist, he intentionally leaves fake cereal products in supermarkets, for instance, or makes fake billboards that are almost indistinguishable from the real advertisements that they parody. It’s almost as if his work is camouflaged by its surroundings, because everyone who sees them are so accustomed to being bombarded with a similar type of imagery. “People have trained themselves to tune out advertisements. If you did not train yourself to tune out advertisements, your brain would explode,” English says, explaining that this phenomenon has created a safer space for him to create without being noticed.

Despite the deeper, often political meanings behind English’s use of camouflage, he acknowledges its importance as an abstract artistic technique. “Camouflage is meant to move around and disorient your eyes so that you don’t lock on to any one thing. It’s to blend you in. In blending in in nature, everything’s kind of swirling and moving and has a kind of energy.

[Camouflage] integrates that energy into your art. It’s a great abstract underlay to something,” he says. “It’s almost like the content is something that rides on top of that.”