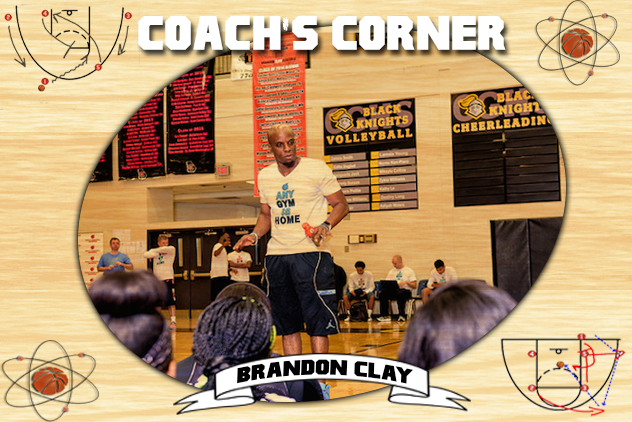 Young Stars, William Wesley, and the Dominance of Steph Curry: An Interview with Brandon Clay

Brandon Clay is a Georgia native and former ball player whose mission is guiding the nation’s top young ball players all the way to the hallowed halls of professional basketball.

Starting fresh out of college in 2002, at 20 Brandon began laying the groundwork for what would become Peach State Basketball, a scouting and recruitment enterprise that has evaluated the likes of Justise Winslow, and Jahlil Okafor. Now in its thirteenth year, his empire is international, having expanded its reach as far as Australia and Canada, a testament to the work that Clay and Keil Moore have put in to provide young basketball players with the tools and support they need to take their game to the next level.

Here we interviewed Brandon about his journey with Peach State, and lessons learned from his peers and heroes along the way.

Player style has become a huge part of the game, with walk-ups receiving almost as much attention as the games themselves. How have you seen player fashion change over the years?
Guys are wearing custom tailored outfits pre-game and post-game now. The NBA dress code was big in assisting with this. The top players (Russell, KD, Steph, and Melo) all pride themselves in their fashion. Also, a couple of music references stood out to me as the increased awareness of fashion style in the NBA heightened during the 2000’s:
Give me a crisp pair of jeans, a button up.—Jay Z
Make your momma proud, take that T-shirt two sizes down.—Andre 3000

The Jimmy Butler/Elfrid Payton look has been popular for a few years. Have you seen the future of baller hairstyles while on the road? Any predictions?
It’s hard to predict what is coming next. From the Dr. J afro to the Will Smith/Kid ‘n Play box cut, the style all depends on who is hot at the time. The kids are definitely rocking the Butler aka the “2015 Duke Starting Five” haircut right now.

Do you collect anything?
I’ve got a bunch of those old Upper Deck trading cards tucked away in the garage back home! But I’m a sneakerhead, a huge sneaker guy. Like the Jordan “72-10” 11, the OVO 10s and 12s, even the lifestyle joints like the Yeezy Boosts. I got ’em all. That’s probably my biggest thing, sneakers. That’s something too, when you talk about resonating with, not only the kids, but everyone involved in the space, that’s one of the things that everyone can appreciate.

What’s your favorite sneaker of all time?
In 2015, it’s a tie between the adidas Yeezy Boost 350 and the OVO Jordan 12. The Jordan 11 Collection are my favorite sneakers ever. The black and red colorway would be my favorite single shoe. In hindsight, the design was ahead of its time with the patent leather.

Who are you listening to right now?
That’s tough. My guy Jay Z has taken a break from making music so I’ll go with Drake. Him and Future are dominating the airwaves right now. I love Adele. Her 19 and 21 albums were classic and the new one, 25, is really good as well. I’ve had Justin Bieber’s latest CD, Purpose, in the rotation too. R&B fans should keep an eye out for Bryson Tiller. His T R A P S O U L album was fantastic. I have tickets to see him live in February.

What’s the mental and emotional wherewithal needed to make it as a superstar athlete today, from your experience?
In an age of immediate feedback from every angle, it’s crucial not to get too high or low based on a single game, week, or even season’s performance. My favorite term is “the dinner table.” That is in reference to a player’s support system in which most of the crucial conversations needed to make the right decisions come over a plate of food with their inner circle.

So many great players have come out of the state of Georgia to go on to have great careers. Why is that?
The competition at an early age is great. The top kids all play with or against each other on a regular basis. Skill development is at a high level in the state as well.

How has the style of play evolved itself over the years and how does that affect the next crop of athletes that will be looking to get drafted?
In terms of points scored nightly, the game hasn’t changed much. I would say that the game requires more physical strength on a game-by-game basis as guys are stronger now than they were decades ago. For guys looking to make instant impacts early in their pro careers, being in top physical shape and possessing an elite speciality are vital. Be one of the 30 best basketball players in the world in at least one statistical category.

How have players changed in your lifetime?
With each generation natural progression occurs when it comes to size. Things like the weight room, protein, and all of that stuff come into play. … I’d say that Steph Curry is going to be for this generation what Allen Iverson was for me. He’s going to be that small guy that you’re rooting for who was “That guy!” He just has a better team around him, he’s got Klay Thompson instead of an Aaron Mckie.

You’re constantly giving back through Peach State Basketball, as are other major players, like Russell Westbrook, through his Why Not? Foundation. What impact does this culture of giving back have on the sport?
Like Russell, I don’t take what the game has provided me for granted. By giving back, we influence the next generation to do the same when it’s their time to take over the reins.

What’s the most important quality in a basketball player?
A lot of kids have the talent and we would rate them four stars or five stars, but they don’t have the passion to play or the work ethic to get better. I tell kids all the time, “My life is a series of five-minute decisions.” In the five minutes that I’m watching Netflix and I know that it’s time for me to get up and go to the gym, I gotta get up and go to the gym. In the five minutes where you don’t want to do your homework or you don’t want to study, put that phone down or turn it off.

Once we get started we’re ok, it’s just the five minutes it takes to put down what you want to do as opposed to what you need to be doing, and then roll from there.

Aside from playing on these traveling teams, what else helps prepare players for their desired careers?
We talk to them while they’re on the road, chop it up with them, and see what’s happening in their lives. We’ll clue them in on who to call if they’re interested in writing: “Call G at Green Label.” “You want to work with Nike? Here’s my girl Lauren, call her.” “You want to work at Pepsi or Mountain Dew?” So we do more of that, more of the “big brother” stuff. Similar to what William “Wes” Wesley does for players. “Got the game from William Wesley, you could never check me,” that was a line that Drake dropped, and Wes’ influence extends way past just basketball.