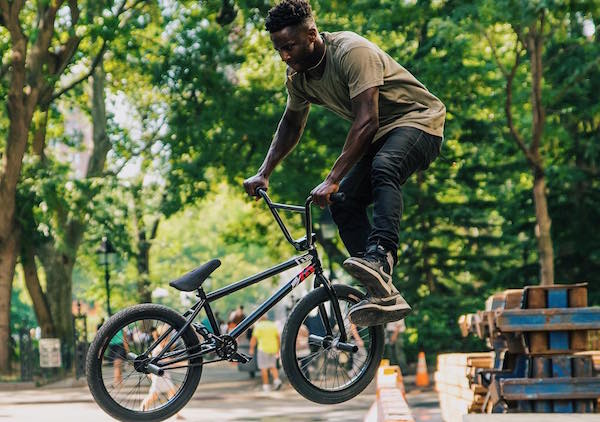 If you unplug one of Nigel Sylvester’s headphones while he’s ripping through New York City’s streets on his bike, there’s no telling whether you’ll hear his favorite song, Jay Z’s classic “Can I Live,” or Adele’s “I Miss You.” It can go either way.

“It’s the emotion that [Adele] conveys in that music,” Sylvester says, relaxing for sips of coffee at a Chinatown restaurant. His bike, housed in a shop next door, is never far. “I’ll pull from that, like, ‘Damn, she’s going so hard right now,’ and that motivates me and pushes me—just that energy she’s putting into that. I take that and transfer it to my bike and go ride.”

Growing up in Jamaica, Queens, during the tough-guy era of the late ‘90s and early aughts, Sylvester idolized multifaceted figures like Pharrell Williams and Dave Mirra, who brought their unorthodox talents to the masses, including those in inner cities. “Dave Mirra, R.I.P., passed away earlier this year, but the things he did—his presence, as far as what he did on the bike as well as off the bike—I was so amazed,” Sylvester says. “He did never-done-before tricks; he invented things; he pushed the bar every time on that level, but he also pushed it on the business side. People in the ‘hood that knew nothing about BMX knew Dave Mirra’s name. He had video games and all these different things that were, on a cultural level, very impactful.” As for Pharrell, who Sylvester calls “P”—he’s still one of Sylvester’s biggest motivating forces, but now, Sylvester calls him a friend.

Sylvester is becoming that guy, inspiring kids everywhere to push their creativity past the bounds of one platform. “Being a black BMX rider, having the outlook that I have, and wanting to express myself a certain way, I get a lot of hate within my industry. I’ve got a lot of people that don’t agree still,” he says. He wants to bring a “lifestyle approach” to the sport, with plans to also dabble in other creative ventures (though he won’t say specifically what just yet).

“I’m not doing anything that I wasn’t doing my entire life—I grew up being an artist; I grew up playing music; I grew up riding bicycles; I grew up playing football and playing basketball and doing all these things. Now I’m at a point in my career where I can use my bicycle, which I’m still going to do my entire life, and I can do a project with a music artist because I’ve loved music my entire life. Why wouldn’t I do that? People just try to box you in.” According to Sylvester, he didn’t become a professional bike rider to fit into the crowd anyway.

Drawing parallels to street art’s ability to repurpose surfaces, Sylvester sees himself as a creative and BMX as an art.

“A street artist goes, takes a wall and makes something else beautiful out of it. It’s the same way that I’ll take my bicycle and go to a stair set, and I’ll repurpose that stair set to make something else out of it. I’m naturally creating art, so why not go and apply that to an actual canvas or structure or something like that?

To make a comparison, the bike spot [where you ride] is like the beat, and the trick you do is the verse. That’s how I compare it. You don’t want to jump on the same beat someone else did, you want get your own joint. You want to spit your own way.”

Sylvester looks to his family, especially his mom, and hip-hop for inspiration.

I come from a very hard-working family, especially my mom. My mom left Grenada when she was in her early 20s and came over, hustling up from the bottom. That’s a massive sacrifice. So when I really think about sacrificing what I have to do right now and how hard I have to work, I usually think about her, like, Yo, I gotta jump down this rail right now.

When you think of a P, a Hov, and a ‘Ye—they went so far beyond music, but kept the music there the whole time. I really believe there is no limit. The things that those dudes have been able to do through that music medium, it’s unheard of. When I look at BMX, it’s very similar. I want to go so far beyond just what’s expected, what’s in that box, and being categorized as just a BMX rider.

Another one from yesterday. Straight 💸 #BMX #basketball #trickshot

Sylvester honed his style by surrounding himself with pros.

I started to hang around a lot of professional bike riders, and when you’re hanging around people that are way better than you, at whatever that is that you guys do, certain people say, “I have to separate myself in order for me to be heard.” Once that clicked, I was doing my tricks my way. I started riding my way, dressing my way, looking a certain way, looking like no one else.