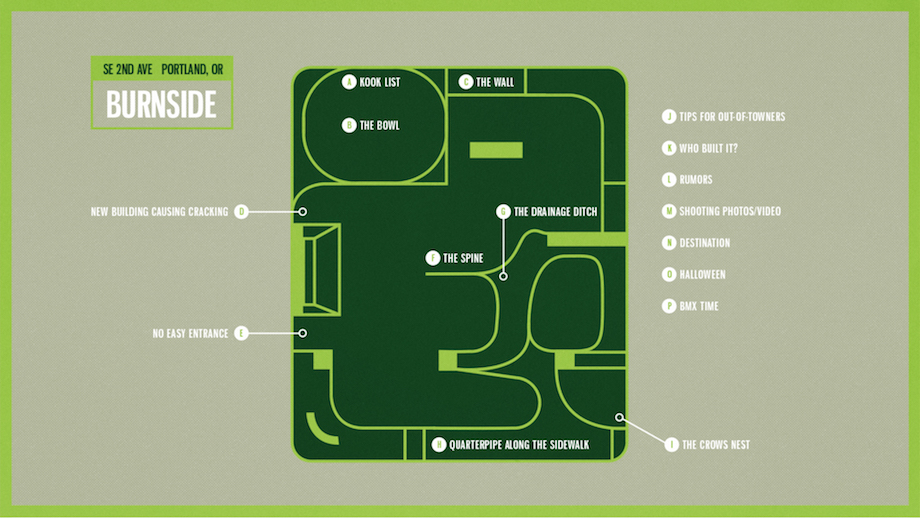 Portland skate photographer and filmmaker Kurt Hayashi has seen the park grow from a few dusty cement patches to one of the world’s most renowned skateparks. He’s also borne witness to some of its most legendary tricks, including John Cardiel’s infamous drop-in. As Burnside evolves, Kurt is there, camera in hand, documenting the spot’s history as it happens.

Quarterpipe along the sidewalk

In the beginning, there was a bowl that was built into the ground. It was a supersmall kidney, only eight feet deep. It’s now filled in and that quarterpipe is built in its place, so there is a bowl underneath that quarterpipe.

That’s basically where people go to lurk If you skate but you’re not friends with the core Burnsiders, the Crow’s Nest is where you hang out. All the people that skate or are part of Burnside are on that pocket area. If you’re not homies, you’re up in the Crow’s Nest.

I think it only stays there for Mikey Chin and Brent Atchley because those guys terrorize that thing. It may be a little launcher for people to fly into the bowl from there, too. You can’t pump it and it’s not really good.

The drainage ditch is used as a BBQ spot. They’ve always put bars across it so you could BBQ.

People drop in from the elbow, air over the hip, carve around the right side, and either do an air or pump the elbow to get speed.

Before, I couldn’t believe anyone could skate that thing. It was super lumpy, and either filled with water or pee. I would never wanna slam on that thing. But, ow it’s awesome! I think they raised it a little bit, smoothed it out. I think the builders learned on that thing, and now they’re building some of the best skate parks in the world.

Red, Mark Scott, Sage… I think anybody that was down there then [in 1991] was building it.

There have been rumors that the Burnside bridge is getting retrofitted. When they start doing that, they could easily shut the park down and put their lifts in there for two, five years until the project is done.

You can see how much weight the New Building is putting on the earth—it’s starting to pull some of the quarterpipes down. There are cracks now, [and] you can see them developing as the building settles.

Supposedly when it’s done, the park will be built up against the New Building. They’re gonna make [it] insane. Each add-on to that park has been really good, and brings something to it, [as well as] a new way to look at it.

With the new building there, it really cuts out the kookiness that goes on at the park. The only way to get into the park now is to climb over the back of the quarterpipe. It keeps out the people who aren’t too serious.

Don’t kook it. Same as any skatepark, when it’s your turn to go, go. You’ll get a random, annoyed Burnside local that might talk smack on you, but there has to be a reason for him to call you out. If you use normal park etiquette, you’ll be fine.

They are usually there in the mornings. Their “set” time is before 10 am on the weekends.

If you don’t know the people there and you come to shoot photos or film, you could get harassed. It’s like, “Oh, you’re here to make money on Burnside.” I’ve heard of guys getting harassed out of the park just for trying to take a picture.

Before they put that new piece up, there was a “kook list”. There were like 15 people on there. I guess you could still blow it there.

If you’ve never been to Burnside on Halloween, it’s one of the best times to go and see absolute carnage. A lot of the original people who built that thing are there. You’ll see Red kill that thing, you’ll see Sage kill that thing; you’ll see people you don’t see on a regular basis skate there and just kill it. It’s the best time to see the park ridden the way it was made to be ridden. And people are in costumes. It’s not so easy to skate in non-skate wear.