With A Stamp of Approval From Action Bronson and Swizz Beatz, Toronto Artist Esmaa “E” Mohamoud Shows The Weight of Hoop Dreams

Around the world, American basketball is the “cool” sport to global youth; for America’s inner-city minorities who both fight for a shot at equality and a spot in “the League,” the sport means so much more.

Toronto artist Esmaa Mohamoud, known as “E” in the art world, tackles that complexity of basketball culture with her first solo exhibition, #000000 VIOLENCE, symbolizing a call for peace on all fronts within the Black community. With installations of large-scale chain hoops and 60 concrete basketballs inspired by 1994 documentary Hoop Dreams, among other features, E uses gritty industrial materials to convert realism into a new-age, interactive art experience.

E thinks artists have a responsibility to the public with their work’s message.

“We’re like any other profession; we owe the public something,” says E, who felt an urgency to address current racial politics with this show. “Sometimes, I don’t feel like a drawing of a rapper, or an athlete even, is enough justice. I feel like a lot of artists who just draw pop culture references are not doing much other than gratifying who that person is, rather than try to educate the youth, uplift them and show them where to go, or give them guidance. Equality is always important to me, but I don’t know what I’m going to make ten years from now. I might make work about ice cream—I love ice cream. But for right now, I think artists have a duty to society, and that is to respond to what’s happening contemporarily.”

The pure concrete basketballs she made each weigh 30 pounds, 1800 pounds all together.

“It’s not enough to make a basketball look heavy; it has to actually be heavy.” E made 60 balls because of its significance as the ending number in the second round of the NBA Draft. “If someone comes up in my show and asks to lift one up, I want them to understand that this is the reality and the gravity of what failed hoop dreams look like, you know? This weighs heavy on a lot of people. I could take a basketball, spray paint it, and cover it with concrete, but that’s not enough to me because that basketball’s still light, you know? I can still lift it and throw it. Nobody’s throwing a 30-pound basketball,” she says.

Although she loves basketball, she actually can’t play.

“I suck at basketball; I’m going to put that on the record right now. But that’s my favorite sport. I’m the jersey queen.” She names her limited-edition Michael Jordan jersey, which she recently purchased for her 23rd birthday, currently hanging on her wall, as her favorite. “You know how girls like to buy shoes? I just like to buy jerseys. It’s just my thing.”

With E’s art, it’s more about the experience than the aesthetic.

“My net pieces are very interactive. At the first exhibition opening of the YTB Gallery in Toronto, I had mad people standing inside the nets, taking pictures of themselves within the net, and to me, that was important,” E says. “It was important to have that experience. As a kid growing up, I had an extreme difficulty when my parents would take me to the galleries or the museums and I couldn’t touch anything. I would just be sniffing them. I was that weird kid who’d be sniffing them and like, This is about as close as I’ma get to the art. My dad would be like, “Yo, stop sniffing the sculptures,” and I’d be like [inhales deeply],” she says with a laugh. “I’m a very physical person. That’s probably what makes me a sculptor; it’s that I need to touch it.” 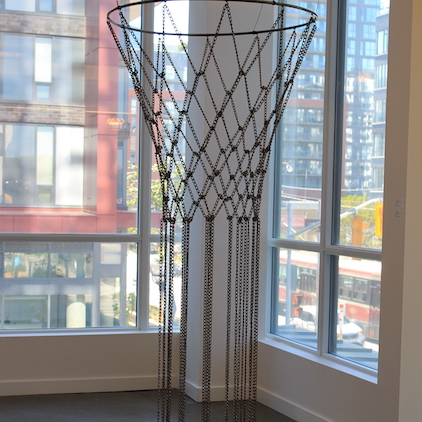 While she is greatly influenced by hip-hop, hip-hop also shows the love back.

“I got a lot of love and respect from Action Bronson; that’s my dude. I made a seven-foot portrait of that man back in May. He’s mad wavy,” E says. “Swizz Beatz just recently told me that he thinks my work is amazing, and that was really important to me because I really look up to that man, and I really respect what he does in the art world. So to have this respect from people that I really look up to is really important for me because it’s less about validation and more so knowing that I’m doing the right thing. I’m not trying to sell myself out; I’m not trying to do what’s poppin’. I don’t ever look for what’s poppin’ in pop culture right now and then run with that. I think that’s corny; I think that’s cheesy; and I think that if your work is strong, you could talk about anything at any time and people are gonna feel what it is.”

“I know that a lot of artists think that you can make it without school, but I’m telling you right now from my experience, at least if you want to show in galleries, most galleries are not going to take you seriously if you don’t have any formal education.” E, who is currently completing her MFA (or Master of Fine Arts) degree at the Ontario College of Art and Design, is using this show as her thesis project. “No one is going to take an artist straight out of high school, regardless of their skill. It’s really rare—I mean you’ve got to be something special, and even at that, all the artists that I know who are famous have, on some level, their BFA or their MFA—at the least a BFA. I know school’s expensive and I’m not saying school’s going to get you those jobs, but school is where you learn, where you meet professors who’ve done this, who’ve been in the art world, who can actually give you information that you can’t get off the Internet or from your other art friends, you know?”