Starting this Friday, we’ll be kicking off our Green Label Live: Las Vegas summer series at LAX Nightclub, bringing you the best in EDM and nightlife culture.

One of the first acts on the bill is famed NYC DJ Hesta Prynn, who’ll be playing this Saturday, April 4. (RSVP here!) (And check our interview with Friday night’s act, Panic City.)

After getting her start in the NYC-based rap group Northern State, Hesta Prynn has come a long way. Called a “musical encyclopedia” by Nylon magazine, the artist is not only a curator but a lover of music as well. From opening for the likes of The Roots and Frank Ocean, she recently finished up her run at SXSW alongside Ryan Hemsworth, Just Blaze, and Hudson Mohawke.

In anticipation of Prynn’s upcoming Green Label Live Vegas showcase at LAX Nightclub this Saturday, we were able to chat with her about her influences and how important her hip-hop roots have become to her career as a DJ.

Sara Quin of Tegan and Sarah said that “Hesta Prynn’s album makes me wish I was a dance choreographer or in a dance posse.” You seem to keep good company in a business that’s a hard place to find camaraderie. What do you think it is about your music and output that makes people react to your music so strongly?

Not sure, but I really try to keep the consciousness of sharing when I’m writing or DJing an event. I try to evoke an emotion in people. I want them to have fun or feel cool or dance, whatever is called for. A good DJ makes it less about themselves and more about the people and the energy in the room. It’s a great job for an introvert.

Your DJ moniker, Hesta Prynn, references the protagonist in the book The Scarlet Letter. You also used this title as your MC name, as part of your all girl hip-hop group, Northern State. This is really interesting considering its feminism roots. How important was it for you to transpose that message on to the work you were making and still producing?

That’s just who I am at this point,. I don’t have to hit people over the head with it at this point like I did when I was younger. Also, the times have changed. When I was rapping on tour with The Roots and making an album with Adrock from the Beastie Boys, there were not that many women doing it—certainly no white women. It was imperative that people knew our politics and where we were coming from.

In an interview you had with Stylenochaser, you said that, “Growing up, I‘ve always identified the moments in my life with their soundtracks. I remember watching Tom & Jerry cartoons and hearing ‘Rhapsody in Blue’ and not knowing what it was but loving it.” Your love of music and knowledge base is definitely reflected in your DJ sets and material. Where did these influences come from?

Growing up in New York and having access to NYC radio in the ’90s is a big part of it I think. Also, I was a very, inside-my-head kind of kid who read a lot and had an active imagination. I used to buy random CDs if I liked the covers—how you might choose wine at first.

With hip-hop being such a big influence on your work and attitude, can you connect your history with the culture with your preference for spinning vinyl?

Not only are you a DJ and musician, but you’re also a ghostwriter. The dichotomy between DJing to crowds of hundreds as an entertainer, and working behind the scenes as a songwriter is an interesting one. How do you juggle those roles?

I really love collaboration and the studio is the best place for that. I love helping an artist be better, helping them bring out their best work. I feel the same way about the audience when I DJ. I want to make them feel better, and be a version of themselves on their best night. It really isn’t about me very much at all, and in that way the two jobs are the same.

Can we expect any new material coming out in the near future?

Yes, I think so. For now I’m focused on writing for other people though.

With UNIIQU3, Ikonika, Anna Lunoe, Nina Las Vegas, Jubilee, and Louisahhh!!! killing it this year, there’s been criticism that women are underrepresented in a male-driven dance culture. As a successful DJ, MC, producer, and songwriter, do you have any suggestions for addressing this issue?

I think with this line of work there’s a real focus on technology, and sitting in your bedroom for hours in high school learning how to use the programs and the gear. Girls are encouraged to look pretty and chase boys, not learn how to use technology. As this changes, we’ll see more women in this world. 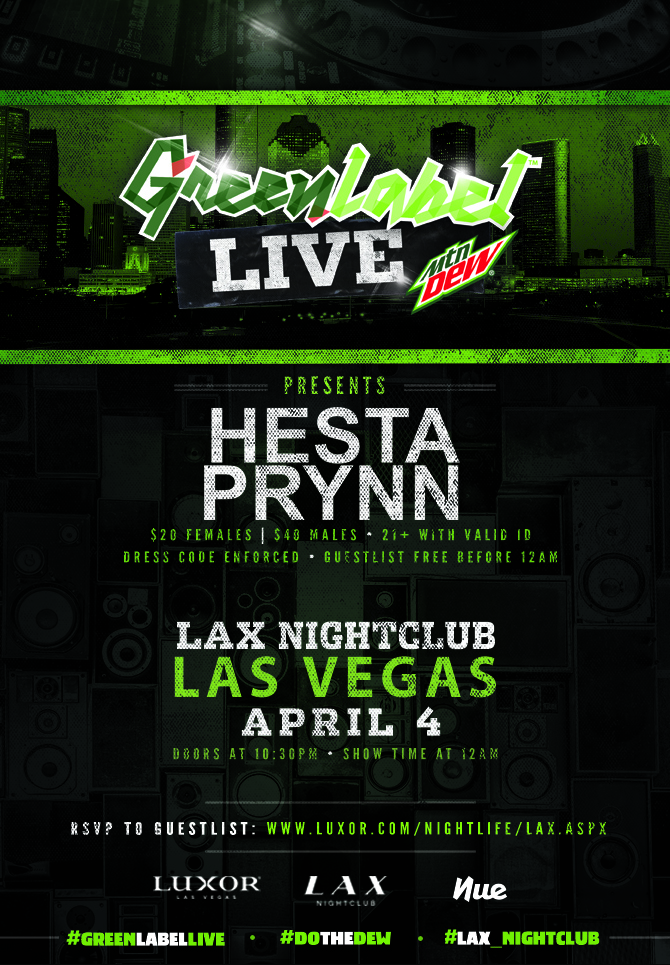