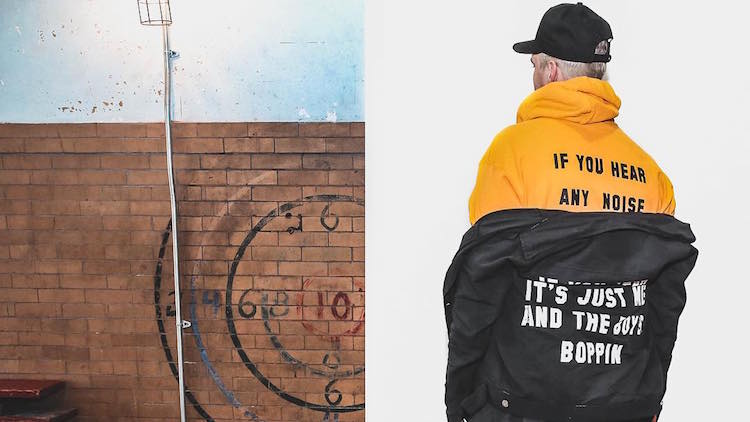 Repurposed: From His “Misplaced Checks” To The New 001, John Geiger Is Changing Sneaker Culture His Way

Floating above crowds in his usual Pirates fitted, Pittsburgh native John Geiger doesn’t blend in. And as a self-described “odd person,” he isn’t a fan of the attention that brings, either.

“I can’t really hide — that’s why I don’t go to a lot of places,” he says over FaceTime from his parents’ home. “I’ll show face and slowly leave.” In town for the release of his collaboration with Premium Co. and Ace Hotel, inspired by “Pixburgh” pride, he still makes sure he visits his family. Taking a break from bagging, tagging, and boxing 300 items by himself in his parents’ basement, he sits and talks, braving the summer heat. “[For the release], I’ll have major butterflies. I firmly believe in not showing too much face. The fact that some people don’t even know what I look like, and they’ll see a Pirate hat and ask me about John Geiger—that, to me, means there’s still that mystery.”

In a sneaker/fashion industry that demands a lot of social activity, Geiger would rather spend countless days relaxing in his Miami condo, or taking in architecture and sights across the world. These days, many of those trips are to oversee production on his forthcoming shoe, the 001, being independently released under his own name.

“I never wanted to be known as a customizer. It just came out because I was taking Nike shoes and changing them, so essentially, it’s like a customization,” Geiger says. “I tried to stop doing that, but there’s so many other ideas I can knock out in between that and my shoe coming out. If I would stop now and just wait for my shoe to come out, I think I would lose momentum, so I’m gonna keep doing stuff. I’m going to release a pair of Air Force 1s in Miami where no one will be able to get that colorway, and I’m lasering some stuff on them. I’m dropping them in an ice cream truck in Wynwood.”

With no training as a designer in an art or fashion school, Geiger credits his time managing football player Darrelle Revis as his start.

When Revis was about to get his first Zoom Revis with Nike, I was a big part of those meetings. I would go in there with drawings. That led into me doing other stuff with NIKEiD. I would feed them ideas, and they would just be like, “This is too crazy,” and I just did it myself. Doing my shoe, I learned a lot.

You can try to copy the “Misplaced Checks,” but you can’t copy the story behind them.

I was getting royalty checks [for design ideas], and they kept telling me they were in the mail. They told me they misplaced them. There were four swooshes on the shoe because you have to change the shoe 30 percent [to not] get a Cease and Desist, so there are four instead of three. The day that I was like, “I’m gonna do this,” I literally went on Footlocker.com, and I bought like 50 pairs of Air Force 1s — no promo code, nothing. I think I did like 30 or 50 pairs, and I released like 35 that first time. Then numerous people hit me, like, “Yo, let me get them.” I went to Dom [Chambrone]. Dom, The Shoe Surgeon, said he was down, [like], “Let’s do it for the minimum. Let’s do it from there.”

The shoe is handmade; it’s super high-end materials. It has rolled seams [where] you don’t see the stitching. The only one that has rolled seams right now is the Yeezy 750. I own the sole — that took a year and a half. If you’ve seen the presentation of the box and everything, I own all the design to it.  I’m not going to go into any stores first; it’s going to be straight to consumer.

After putting out his own line, Geiger wants to inspire kids to do the same thing.

So many are so obsessed with seeing what’s good now and making that same thing instead of trying to think ahead. I think that’s what I’m gifted at. You gotta just keep it moving. People were asking, “How are you even getting all of this stuff made at once?” There’s like, five things getting made right now that I’m gonna be releasing in the next two months, and then my own shoe. I just gotta keep moving forward, and the fact that I’m doing it myself is pretty crazy, so that means anybody can really do it. Even for my own shoe, I don’t have any backing or anything. I’m like 45 grand in. It’s a major payoff though.

I would draw sketches of shoes all the time, not confident in what people would think I wouldn’t show anyone. Not until last year when I would start putting out unorthodox designs, the “not for everyone” designs I realized a certain crowd liked it. Designing to me isn’t anything more then having an idea and following through on a vision in my head, completing something. I’ve been working on this now for a good year and a half, so many times I wanted to rush it because i would see others putting out things. I learned patience which I still work on, but this project turned into something bigger and it’s almost ready. Releasing it my way and when I feel like the time is right. If you been following along the journey thank you, seeing my name finally on everything was wild. The roll out for the launch isn’t going to be the norm, link in bio if you want to stay in the “know” -John Geiger (📷 @danfolger)

He’s inspired by his peers and athletes.

The only people I really, really look at as what I compete with or look forward to seeing what they’re doing is Ronnie [Fieg] and then Virgil [Abloh]. On the retail side would be Ronnie, and then overall brand would be Virgil. Virgil right now is killing it; Ronnie with Kith is killing it. I liked Don C when he did more of the hats, but I mean, everybody in Kanye’s camp.

This is going to sound crazy, but growing up, my biggest inspiration was probably Dennis Rodman. Dennis Rodman then, not now. I liked Penny Hardaway, too. Those older Pirates, I learned about when I was older, and some of the stuff I’m releasing in Pittsburgh is based off of that.

Dock Ellis and Dave Parker were the other ones. They played with each other for a little bit, but then Dock Ellis got traded. He’d wear like curlers and warm-ups. I have pictures of both of them in my house now. They’re signed to my dad’s dad.

Geiger still learns from the youth.

I’ve been to Paris twice before, and the last time I was there, I was there for New Year’s, and it just so happened Luka [Sabbat] was over there. He showed me stuff that I would’ve never seen and took me to restaurants I never would’ve ate at, and it was a different experience. I was with him for like three days; I was there for seven. I wish I would’ve known he was there the whole seven. It would’ve been way better. He’s pretty ahead. At 17, 18, I was graduating high school, trying to figure out what I’m gonna do for college, and this kid’s modeling for like Calvin Klein. It’s a different world.

A “No” can sometimes be more rewarding than a “Yes.”

I probably wouldn’t have done it on my own if people would’ve said yes. Being told “No” made me have more drive. And at some point, you’ve gotta be a little bit cocky and be like, “You don’t want to rock with me? Alright.”

After shoes, Geiger plans to conquer clothing and beyond.

It’s going to be one shoe at a time; then it’s going to lead into seasons, and then go from there to clothing. I’m going to put out clothes probably in the spring. It’s not going to be like t-shirts; it’ll be like cut and sew stuff. It’s definitely going to be higher end. It’s not going to be streetwear stuff, but it might be mixed. Davin, the owner of Premium Co., is like my best friend. He’s helping me a lot on the clothing side of getting stuff made. Clothing-wise, there are different warehouses for different things — fabric, dye, all of that stuff. [I’m] still learning all that. Really there’s no rush, either. I want to start working on furniture, but it’s so crazy because Kanye just said that, but I’ve been saying that for a while. I don’t know. I’ll probably get into that soon.

Instead of following trends, Geiger continues to craft his own lane.