MoRuf came up in Jersey’s music scene interpolating bits and pieces of R&B and soul into hip-hop. Now he’s worked with Brooklynite and Jesse Boykins III-collaborator MeLo-X on a follow-up to 2013’s fan-loved Shades.Of.Moo.

If MoRuf could boast about one thing, however, it would probably be his family. Inspired by his immigrant parents and their journey from Nigeria, MoRuf’s always believed in himself because of them, helping him walk a straight line and not drown in social traps. On a break from the Be Water tour en route to Philadelphia, MoRuf sends us some valuable insight from his own creative past, and even shares his own secret to social media.

What did you do right to get the opportunity to make music?
I just believed in myself. Regardless of what people thought, I kept going. As I kept going I got better.

Who are some of your heroes and what have you learned from them about songwriting?
My parents. They came from Nigeria in the early ’70s. I’m not sure if they taught me something about songwriting, but that action alone is always a reminder to take risks and follow your gut.

What was the risk they took?
Them leaving their homeland in their early twenties with hopes of having a better life for them and their children. Like, literally coming to a foreign land. That takes a lot of faith and belief. That risk they took was worth it. But they wouldn’t have known if they were afraid. That’s my inspiration and reminder of why taking risk is necessary in life.

Did anyone guide you musically or was it path you discovered and pursued on your own?
I grew up bumping music my sisters listened to, ’90s R&B mostly: Sisters With Voices, Raphael Saadiq, Tribe, Anita. As I got older I got into more hip-hop vibes: Jada, Hov, Kanye, then the Dilla/Slum, MF Doom, Madlib/Quasi. It was over from there. Around my freshman year in college, DJ Dozen was the first person to get me in a studio. That’s when I fell in love with creating music and not just rapping on beats.

Who was the first person you got to play a record in front of that mattered?
My mother.

Were you hesitant to show your family your work?
Hell yeah, I was nervous. My sister Modinat is like my best friend. I would always go to her and spit random bars. She never [put me down], even when I was talking rubbish. She would just say fix this, fix that, stop [cussing], ha ha. I appreciated it. Over time I became more comfortable with myself, and grew as a person and artist, and didn’t care much what anyone thought. It was a mutual respect.

Was there a point when you wanted to give up?
I wouldn’t say give up, but there were moments of frustration and questioning. I use those times as my motivation. 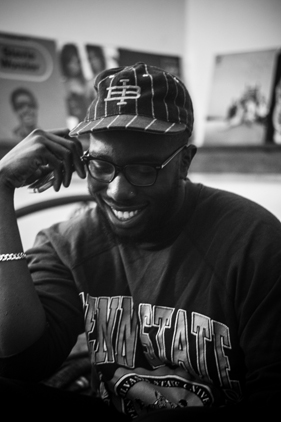 What is your thought process when you realize you’re slipping into self-doubt?
That it’s temporary. It’s never easy. As humans we all have our moments. But I just know that no one is going feel sorry for a grown man feeling sorry for himself. Sounds brittle, but it’s real. I just try not to drown within it and follow the task at hand.

How do you market yourself?
I basically use social media to my advantage. From BlastChat, Twitter, Snapchat, Facebook, to Instagram. I promote my music, merch, upcoming shows, business, without being annoying and spamming. I try to balance it with lifestyle stuff.

What do you mean “lifestyle stuff?”
Just everyday things, like random pictures: “Oh, I like the way the sky looks, so I’m going to post a picture and write a cool caption.” I guess anything that doesn’t have to do with music. I try not to flood my social media with SoundCloud links and show flyers.

What do you do well in social media?
Good question. I don’t know. I guess be myself. I have a love/hate relationship with social media. You can get so consumed with it. There’s hella [nonsense] on the Internet. It’s crazy. So I would just try to my best to take advantage of networking and building with others out of my physical reach. That’s basically what I did to put together the current L.O.E. Be Water tour. Next stop: Philly!

What’s the most useful piece of advice you’ve ever been given?
One of my professors from college said something around my junior year that stuck with me to this day: “The only advice I will give you guys after graduation is don’t look for a job. Create it.” That’s Professor Baker in 2012. Simple, yet powerful. I appreciate him for that.