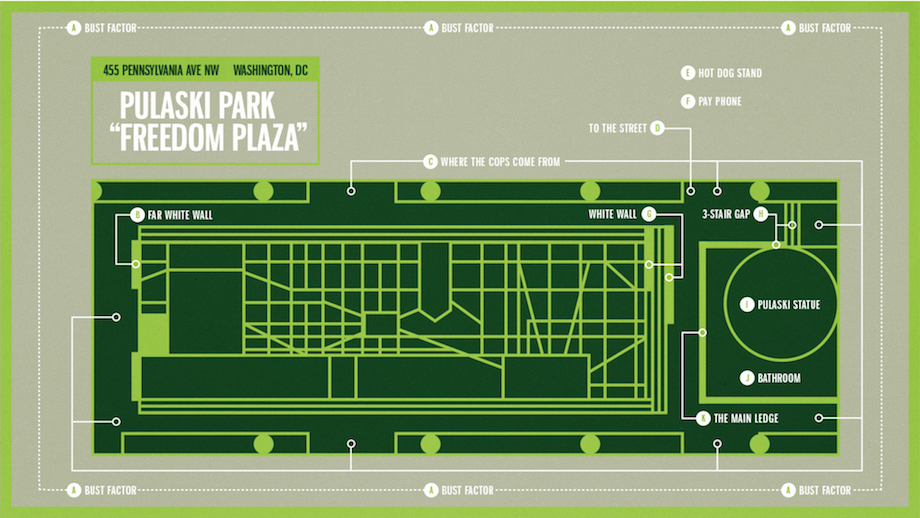 One man has seen almost everything go down at Pulaski: Jimmy Pelletier. He filmed Chris Hall and Pepe Martinez inventing tricks on that hallowed ground and is still active in the scene today. He is working on a documentary film about the park and the skating that has gone down there.

If you called 202-638-9511 or 9509 on the other side of the pole, a homeless person would usually answer and you could ask if there were any skaters across the street. If they said “yes,” you asked them to yell one of them over to the phone. Once that took place then you could ask the skater if they could see Pep, or Eben Jahnke, or Chris Hall, etcetera. You could get the lowdown if the session was popping or not. Hojin Chang one month had the infamous “cachinger.” This was a device that you got at Radio Shack. I’m not sure what it was really for, but for every beep it gave that would count for a quarter credit. So you could call long distance. The story was that some of the crew called EMB [skate spot] in SF—apparently there was a pay phone near EMB. The rumor was that Henry Sanchez called the Pulaski phone looking for Pep once. I should ask Henry now if that was true. I have always wondered…

The reason that ledge was and is still the main ledge to session is because anyone driving downtown or coming in from the metro train would enter through that area. Now, decades later, it is waxed and grinded. It’s better for skating than the untouched ledges.

I saw people ollie that big white ledge with the drop in 1988. Did I ever think ever that someone in 2011 would caballerial kickflip it? No, but they did. Stan Karbine did. He soared over it.

The double wall channel ollie is so gnarly. It’s like an Evel Knievel launch with no motor. We used to joke about it as kids, ’cause it seemed so insane to even think it was possible. There are rumors that Sheffey tried it back in the day. You know what, I’m gonna call him right now to see what’s the real story. [pause]

Just got off the phone with him. He said he never attempted it. So now you know how gnarly it is. So, about 10 years ago, Reese Forbes was back in town and rumor has it he attempted it a few times. You know what, it’s time to call him too and set the record straight.

Wow he just texted me that it’s true! Wow!

So, that gap is very difficult, even to this day. You need speed to clear it, but you have to ollie up a ledge first, and as soon as you do you pretty much have to land with your feet in trick position. Andy Stone was the first to really get technical on that gap, and then Dustin Charlton did as well. And I’m talking like 1994, too, for Andy. I would say Yoshi (Tanenbaum) owns that thing now. He does tail slide flip outs over the gap. Crazy—and this is a rumor I totally believe—but they told me he wants to do kickflip back tail in and slide pop a backside kickflip out. And I 100-percent believe he could do it, no problem. Brian Tucci and Andy Stone have ollied up the side of it onto the ledge. Minus the stairs.

Most of us never used the small baby bump over the wall. We came from the other direction and did tricks over it to flat. The little bump hip doesn’t really set you up to go over it—it goes sideways. The most memorable tricks are 1989 Sheffey backsides 180 over it with a tall school desk in front of it, at car speed. Then in ’91 Donger Kien Lieu frontside 360 ollies over it; in 1993, Pep Martinez switch backside 180 kickflipped over it, cleared it by a foot. And Andy Stone fakie tre flips it in 1994. I own the footage of that, for all the non-believers.

Getting kicked out was enforced by the Park Police in 1996. By then it was super hot to skate there; by 1999 we were in fear of never skating there again. It was a $50 ticket and your board got confiscated and you had to pay to get it back. If you didn’t pay the ticket, it would go on your license and double and triple in price until you pay. Then, it puts a block on your license; you can’t drive until you pay those tickets. I never wanted to pay them, ever, so I refused to drive. They escalated up to, like, $650. Seven years later, they dropped all moving violations in DC without telling people, so mine are back to, like, $10.

If you look at an old 411VM, one skater is doing a Wheels Of Fortune on Greg Harris and they are actually in the hotdog stand, interviewing him from the inside out. That vendor was named Gus. He made so much money off skaters, but he was so rad. He would let us hide our boards in his hot dog stand and once put up bail money for someone who got arrested. Then that guy got a divorce from his wife and to this day she runs the hot dog stand and it is still on that corner.

Mike Mapp, he was pro for Uncle Wiggly’s Skateboards in the mid-’80s. He owns Ramp Tech, which is a ramp company known around the world. He coined the name “Pulaski” after the General Pulaski statue there. That’s why it went from tourists calling it Freedom Plaza to him and the Toke Team, who were the badass skaters back in the day, calling it Pulaski.

Pep and I were there to witness history when Ali Mills was the first skater to ever to ollie into the street from Pulaski. That was in 1991. He did the opposite side that Yoshi and them are doing now. It’s harder cause you’re going up hill a little bit. He went in between parked cars so it was gnaaaaarly.