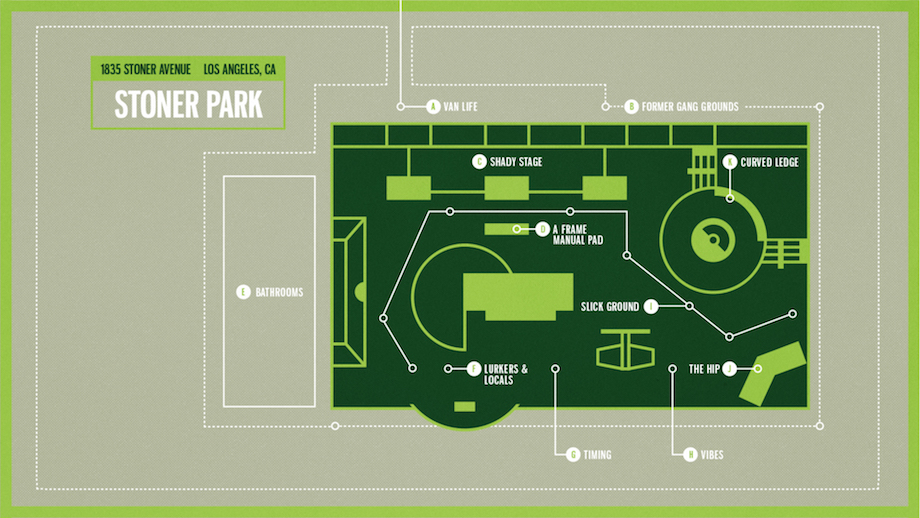 No one has spent more time at Stoner Skate Park than Sebo Walker. In fact, he lived in his van right by the park for quite some time. Now a pro for Krooked Skateboarding, Walker isn’t at Stoner quite as much as he used to be, due to traveling obligations. But if you’re lucky, you might still be able to catch him at the park skating it better than just about anyone else.

Most people complain about how slick it is, and I get it. It can be annoying when it’s hard to push or you slip out when on normal ground you would have rode away, but it just takes adapting to. Once you get used to it it’s really fun. You could land a trick with an unintentional extra 180 powerslide, or just do powerslides by themselves and have a great ol’ time. It is what it is, so be prepared to slide around and get your backside powerslides down long and proper.

Stoner itself is a great street to park on, and the neighborhood in general is safe and good for living in your van, as long as you’re somewhat quiet and secretive. I have a gym membership for shower access, and there are tons of good food spots and coffee shops to hang out and work at. It’s quite a mellow neighborhood and has all you need as a skateboarder.

There are a couple local lurkers but they are harmless, seemingly normal, and minding their own business. No fights or problems really ever go down. It’s really the most peaceful, positive vibes of any skate park I have ever been to.

It used to be a gang hangout but times have changed, and it’s just skaters, kids, and families, people working out in the fields, playing tennis, etcetera.

That has always been one of the areas where everyone puts their bags, sits down, watches, etcetera. It is also one of the best ledges there. When you get the chance to skate it without people sitting, it’s super fun. I think because it’s one of the only shaded areas, it became the chill spot. We need to get a live band that can jam out on there while we skate!

The hip/quarter is just perfect in my opinion. The dimensions are great, and it’s so perfect to learn on. That’s the main obstacle I am always trying new tricks on, and it’s where I learned how to do backside and frontside airs. It always generates a good flow, shooting you back into the park in a different direction.

It is a really perfect curve, and I’m not sure if it’s a secret, but you just have to go fast to do the whole thing. Start slower and work your way up. A lot of people sit above it, which is kind of the other chill zone to put your bags and watch, but it won’t bother you while catching your curve ledge tricks, you’ll just have an audience. Go fast, lock in, and cruise it all the way.

Best time is when the park opens, 10:00 am on a weekday. That’s at least when it’s the most mellow. Stoner’s layout is great in the sense that even when it’s crowded it’s pretty spread out so it’s never really frustratingly busy. Weekends are always busy with kids but I think it’s fun. The overall vibe is so positive that I never feel annoyed when it’s busy, it’s just a bunch of friends and kids doing what we love. Can’t be mad at that!

I believe that’s a Joey Brezinski influence, a replica of one of his obstacles. It is so much fun! There are so many different ways to skate it, and it’s in the middle so you can just cruise up and down it on your way to the other side of the park. I have personally learned a bunch of tricks on it. It never gets old.

Stoner stays strong and has the best overall positive vibe at any skate park I have ever been to. That’s why you can always find me there!