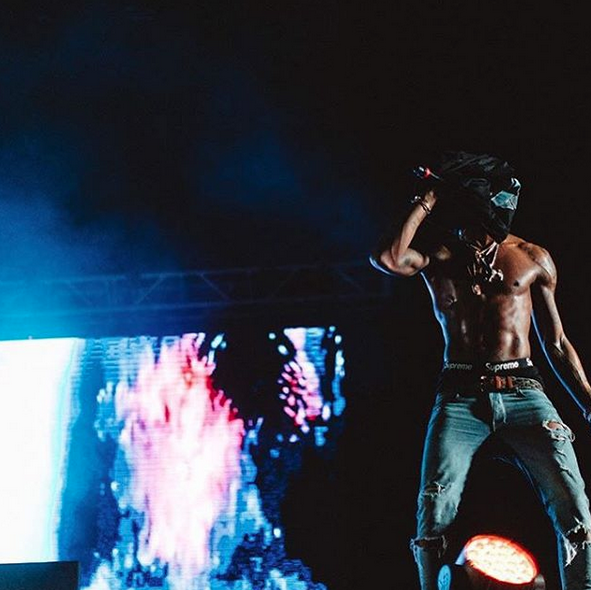 In a recent interview with Highsnobiety, Brooklyn-based rapper Leikeli47 sheds light on why she wears a ski mask. “The mask keeps the focus on my music,” she says at one point. “It helps me with performing, too.”

Likewise, in a 2009 New Yorker profile, underground mask-wearing legend DOOM said, “I wanted to get onstage and orate, without people thinking about the normal things people think about. Like girls being like, ‘Oh, he’s sexy,’ or ‘I don’t want him, he’s ugly,’ and then other dudes sizing you up. A visual always brings a first impression. But if there’s going to be a first impression I might as well use it to control the story. So why not do something like throw a mask on?”

This is a just a new development in an age-old trend in hip-hop, though: look at rap videos from the late-’90s-to-late-aughts. You’ll find that almost literally everyone wore shades back then. Anonymity as an accessory has always been cool.

Complex put together this recent history of rappers wearing masks; prominent on the list are those from Kanye’s Yeezus tour. Sure, no one’s wearing a couture Margiela mask entirely as a defensive measure, but given Ye’s noted contempt towards the paparazzi, it makes sense how a mask could be used theatrically as a form of self-erasure.

But in the branding era, anonymity could be the worst possible marketing strategy. Engaging with fans over social media is often tantamount to having a career making good music.

Buzzworthy artists–especially when performing at buzzworthy festivals—are now on a world stage, whether they like it or not. It’s funny to think about how the future of live performances is increasingly concerned with streaming technology, with the virtual audience taking priority. How your show looks in a few 10-second clips on Instagram could determine whether or not a person will buy a ticket to your next one. It’s enough to make every rapper want to incite retro-filter-ready mosh riots at their shows, à la Travis Scott.

How exhausting being an artist in the social media age must be, having to worry about entertaining a live crowd and the people “watching from the timelines.” To don a mask is to steal back the show from the unblinking digital eye in a way, filing it back into the music and show production. Even Travis is wearing masks on stage now. This is the same guy who put an action figure on his album cover; the rapper who many Twitter critics say is an absent amalgamation of his influences. Perhaps the mask could be seen as yet another example of La Flame purposefully evading a definitive face in music, creating an inanimate shell to take blame for being obsessed with his muses. Masks, like sunglasses, offer some protection against the godlike global gaze of collective media. That’s why it’s hard to blame new artists like Leikeli47 for drawing the curtains a bit, even if it means performing behind them at times.