Meet the Artists Who Hide In Big Box Stores

While a luxury of the developed world, going to the supermarket quickly becomes one of the more mundane experiences for an average citizen. Every day, people trudge into their preferred store, pick up the items they need, pay for them, pack up their cars, and head home. Sans the lucky few who got to be contestants on Supermarket Sweep , shopping for necessities is a joyless trudge.

Breaking up this routine for unsuspecting shoppers is Urban Camouflage, by German artists Yvonne Rundio and Sabina Keric. Starting in 2007, Rundio and Keric built three-dimensional costumes based on the ghille suits of hunters and snipers, but intended to camouflage into the backdrop of large, anodyne retail settings. Made out of plastic bottles, cleaning cloths, or cardboard, their models were practically invisible to  bored shoppers walking by. “Camouflaging in a commercial space … merges with mass-produced products,” they said. “Customers expect nothing out of the ordinary in a world of brands and price labels.” 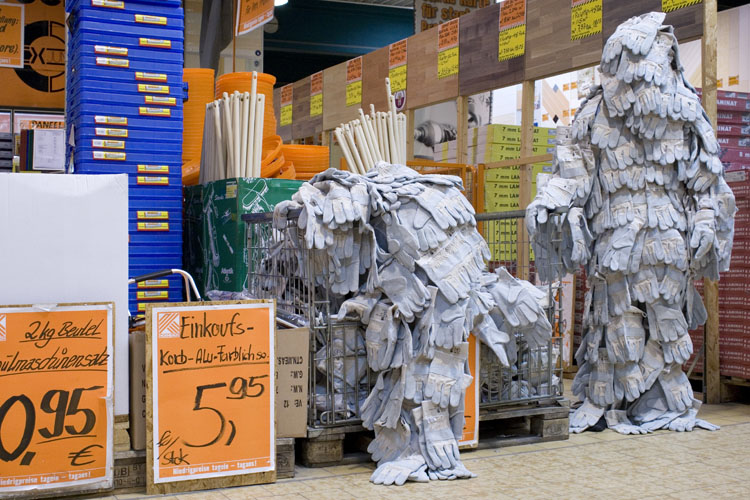 The first public camouflage stunt Rundio and Kerc pulled was in a Stockholm supermarket. They designed a 3D costume made out of cleaning cloths, which were stacked in boxes in the middle of the store. They took photographs and video of their model standing next to and climbing on top of the cloths. Their second project took place at Sweden’s flagship superstore, Ikea. Their model wore a suit made out of cardboard boxes and walked up and down the aisles. “We chose the big superstores because of the extreme range of these everyday life goods, the flashing monitors and the large salesrooms,” Rundio and Keric wrote in an email. “The camouflaged person blends perfectly into the surrounding. He or she can disappear for one moment and gets the possibility to merge with the superstores to defend from the noise of commerce.”

Rundio and Keric met while studying Communication Design at Germany’s Karlsruhe University of Arts and Design. They began collaborating together during an exchange term at Stockholm’s Konstfack University, after taking a seminar on how to camouflage oneself in the public space. Whereas most public camouflage projects begin as underground, illicit street art, Rundio and Keric’s was sanctioned by their educational institution.

In the tradition of street art, they often carried out their performances without permission. “Most employees reacted humorously, but we had some trouble with the management as well and had to quit some actions earlier than we wanted to,” Rundio and Keric said. As for the customers, “the reactions were really different … Some were interested and tried to touch the costume, others reacted irritated and stayed in some distance. There were also customers who ignored us completely. It seemed like they didn’t want to get disturbed or irritated by us in their everyday life and routine.”

The Urban Camouflage project recalls works by artists Desiree Palmen and Liu Bolin, who often paint themselves in order to “disappear” into the background in a public space. But Rundio and Keric claim their project has a key distinction: “[Their] camouflage effect only works from a specific position,” they wrote. “We use materials to build a three-dimensional costume [where] … the camouflage effect isn’t only about the color, it’s also about the three-dimensional structure and it works from different positions, also in motion.”

The use of movement in Rundio and Keric’s performances is important. It’s often only when they start to move that customers notice that something unusual is going on during their daily shopping routine. “That is the moment when they start to think about it, or at least notice that something is different in their daily life,” Rundio and Keric said. “What counts is that people react in any way, especially when they show their real feelings.”

Rundio and Keric continued Urban Camouflage after returning to Germany in 2009 and 2010, but stopped working on it after their seventh and final performance. “So far, we do not have any concrete ideas for new projects, but we will see what the future brings up,” they wrote. Each of the seven performances are archived in photos and video on their website, inviting viewers to think differently about this near-universal chore.