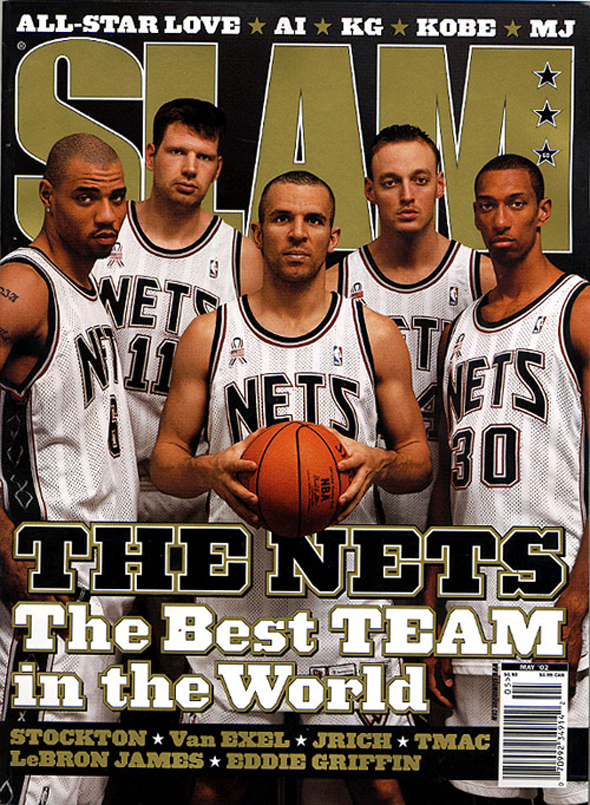 We Revisited A Slam Magazine from ASW 2002, When the Nets Were the Best Team in the World

Before Basketball Twitter’s loose agglomeration of smart alecks, there was Slam Magazine’s “Noyz” section. Penned anonymously by the editorial staff (the quips in this issue were likely written by Russ Bengston, then-Editor in Chief), “Noyz” was a series of one-liners buried in relatively small print at the bottom of pages. This edginess was an essential part of Slam’s appeal. The self-appointed “in-your-face basketball magazine” was written colloquially, and covered a wider array of subjects than its competitors Dime Magazine and the NBA’s official publication, HOOP.

When Slam went to Philadelphia for All-Star Weekend in 2002, they came back with more than just jokes about Chris Webber’s ugly shoes.

“Still, there are doubts as [New] Jersey heads toward the playoffs. For starters, they don’t have a clear-cut, number-one scoring option. [Kenyon] Martin says he wants to be that man, but right now there’s not a bona fide go-to guy. Some see that as a plus, as opponents won’t be able to shut down all five scoring threats. Fair enough, but name the last NBA champion that didn’t have one star scorer who could be counted on to hit a game-winner when it mattered most.

There’s also the question of style. The Nets love to run and gun, but in the playoffs, the [Pat] Rileys and the [Phil] Jacksons like to slow things down. Halfcourt games aren’t exactly the Nets’ specialty. Plus, there’s always that nagging feeling that, hey, this is the Nets, and something bad is bound to happen….”

Slam’s predictions came to pass: In the 2002 NBA Finals, the Nets were swept by a Phil Jackson-coached Lakers team. Despite valiant efforts by Jason Kidd, who’d finish the season runner-up in Most Valuable Player voting, the Nets lacked the depth to compete with the league’s most dominant 1-2 combination. Kidd, a perennial All-Star who spent seven years as a Net, would have to wait until his 17th NBA season to win a championship.

Though Martin was ultimately overwhelmed by Shaq (who averaged 36 points, 12 rebounds, and 4 assists in the Finals), the Nets’ young center had, to-date, displayed enough scoring and rebounding prowess that the future seemed bright in New Jersey. The following year, the Nets returned to the Finals, where they’d again fall victim to another dynasty–the Tim Duncan-led Spurs. These seasons would turn out to be the pinnacle of the Nets’ stay in New Jersey; head coach Byron Scott, who’d coached both Finals teams, was fired during the 2003-2004 season, and Martin was traded to the Denver Nuggets in the offseason.

It took over a decade, but the Nets would have their revenge on the Lakers. Scott has coached the Lakers to the two worst seasons in franchise history.

“For the record, even the players know the Dunk Contest is wack. Here’s Ray Allen: ‘Now they’re trying to get too gimmicky. I think having non-NBA players get into the Dunk Contest would be a good idea, because you gotta bring the excitement. A lot of the NBA players don’t have the enthusiasm anymore…”
Slam Magazine and Ray Allen’s sentiments were fairly common in the early-2000s: a series of lackluster competitions in the late ’90s, combined with a two-season absence from All-Star Weekend, turned public opinion against the once-popular Dunk Contest. The league, which unsuccessfully attempted to replace the Dunk Contest with 2Ball (a proto-Shooting Stars Competition) in 1998, brought it back to great success in 2000. Vince Carter’s electrifying performance should’ve set the tone for subsequent contests. Instead, Desmond Mason’s 2001 win was underwhelming, and the 2002 competition included a “Dunk Wheel,” which determined what kind of dunk participants would attempt. Gimmicky indeed.

“It all turned out OK in the end, but when Dikembe Mutombo scored the East’s first four points, it started to look like a lo-o-o-o-o-o-ong night. Then God made Tracy McGrady.”
Dikembe Mutombo is known for many things: his signature post-rejection finger wag, his never-bested record of four Defensive Player of the Year awards, and his dedication to humanitarian work in his home country, Congo. His offensive game was, well, pretty offensive. The same couldn’t be said of Tracy McGrady, one of the most gifted NBA players of the past 20 years.

At the 2002 All-Star break, McGrady was in the midst of one of the greatest offensive seasons in modern NBA history; the sleepy-eyed wing’s casual 24 points in the game (he averaged 32 for the season) were highlighted by throwing the ball off the backboard to himself for a dunk. Dirk Nowitzki and Peja Stojakovic, “defending” on the play, wisely elected not to intervene.

“It’s All-Star Weekend in Philly, and inside the East Locker Room, Alonzo Mourning, his priorities in order, is looking for some keepsakes…Somewhere down the hall, AI and MJ, the dynamic duo, are talking…Iverson is saying that playing this All-Star Game with MJ will be cool, but he’s really glad that his son, ‘Deuce,’ will see it. ‘Deuce is four years old,’ AI explains, ‘and we sit around the house and he’ll say “You’re Allen Iverson and I’m Michael Jordan.” We play one-on-one,’ AI reveals.
‘I hope Michael Jordan wins,’ cracks MJ.
The lesson: Even Deuce Iverson wants to be Michael Jordan.’
When Michael Jordan re-retired in 1998, Nike ran print ads with an iconic photo from the 1988 Dunk Contest. In Jordan’s place was a blank, all-black silhouette with a dotted outline. The message was clear: Who’s next?

Thankfully, it seems that the search for “The Next Jordan” has mostly abated. It’s hard to know what extent the league hoped for an heir to His Airness, but it’s undoubted that great amounts of narrative-building and myth-making happened in the wake of his second retirement. Of those designated Saviors Of The NBA in the wake of Jordan’s second retirement, Allen Iverson surely ticked off more people than any of the others combined.

Allen Iverson, of the immaculate cornrows, and possessor of a hypnotic crossover, became a hero to a generation of kids who’d never seen an NBA star so unalloyed. He even looked like a rapper, going so far as to release “40 Bars,” a song so explicit it drew condemnation from David Stern, a diminutive automaton/then-NBA Commissioner. Iverson was marketable, Jordan was packaged; Jordan once (supposedly) quipped that he didn’t support black Democratic candidate Harvey Gantt in a 1990 North Carolina Senate race because “Republicans buy sneakers, too.”

Enthralling an athlete as he was, Iverson never assumed the mantle from Jordan. He was too mercurial, too scary for suburban sensibilities. But he did something most NBA players never did: shook Jordan out of his red-and-white 12’s.