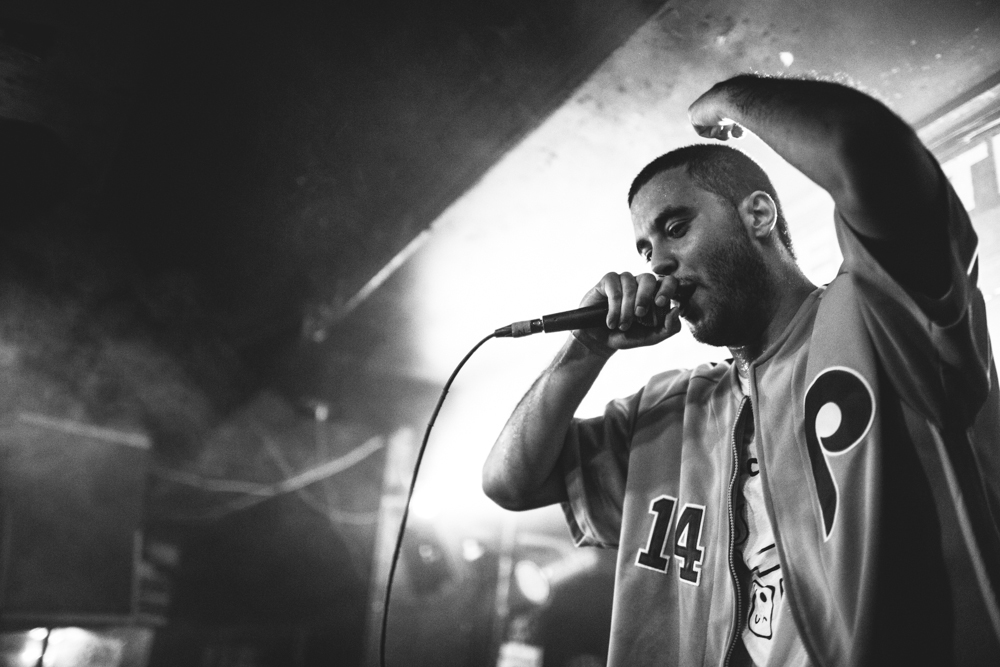 Brooklyn’s real rugged no-holds-barred rap aficionado Your Old Droog defended himself against an aggressively unmoved Toronto crowd last Wednesday, when he opened for the legendary (and better known) DJ Premier.

The 300 or so Canuck fans behaved so unruly before PRhyme took the stage that the Ukrainian emcee Droog bucked fans in Hudson’s Bay capotes as if in the Calgary Stampede. If it wasn’t for his buckwheat Timbs and Crown Heights rasp, Droog’s first campaign may have ended early in “Little York.”

Wedged between the back door of the venue and a large van for our interview, Droog had no way of anticipating the coldness of the up-north crowd. Having toured college campuses and big American cities, he had grown accustomed to Internet geeks shouting back the lyrics to “Bad To The Bone” and “Loosey In The Store With Pennies”—even though the Toronto crowd was more attuned to the throwback references in “No Message.”

“I remember going to different hoods and having to prove myself,” says Droog, whose self-titled LP won him the respect of rap immortals in New York like Prodigy of Mobb Deep, Lil’ Fame of M.O.P. and Masta Ace, the latter of whom helped him prepare for his debut performance at Webster Hall in September.

“I’m a fan of rap. I know what’s hot,” he continues, citing the song “Nutty Bars” as the one that really set things off for him career-wise. “When I left the studio recording it, we were just hyped playing it back. I went home and listened to it like 18 times in a row.”

That track appeared first on Droog’s self-titled EP. “I already knew the project was dope,” he says. “All that mattered was that I was proud of it.”

Before any of these projects dropped, however, Droog had been sharpening his skills with a handful of producers he was introduced to through Sacha Jenkins, the creative director who discovered him on YouTube.

“I realized I had to stop pretending to be Puerto Rican,” says Droog. “It’s like, how long could I keep that up?”

During his period of transition, Droog started going downtown to record and worked with DJ Skizz and Marco Polo, both of whom accompanied him to Toronto and provide the old school flavor to his self-proclaimed “nutty bars.”

Such nutty lyrics are on full display on a song called “Gentrify My Hood” off his recent Kinison EP, a reference to the comedian. Droog spits tongue-in-cheek about his Starbucks fetish. “That’s the funniest thing. We were literally in the studio joking around,” he says. “It’s not a literal song. It’s not supposed to be an autobiography.”

Which is good. Because Droog relied on his ruggedness, not his sense of humor, to keep the Toronto crowd at bay.

“You guys don’t care about me. You came to see PRhyme,” he spat at the end of his set, prompting one of the Golden Era snobs at the back of the room to hiss.

The scene recalled Droog’s early days as a battle-rapper in the lunch room of his Coney Island high school, before he started rhyming over the likes of Jay-Z and Black Moon on the radio.

“I didn’t take a loss for a minute,” Droog says of his battle-rapping. “Nobody knew about that one loss. It happened in the lunch room, real early, 9th grade.”

Losses aside, Droog’s clearly winning. He’s touring around meeting his idols and collaborating with other artists. He’s even met his star crush, MSNBC anchor Tamron Hall.

“She’s down to Earth,” says Droog. “She gave me some good advice. How to stay hungry and focused on what you do … Just keep doing what I’m doing.”